OqtaDrive emulates a bank of 8 Microdrives for use with a Sinclair Spectrum (with Interface 1) or QL machine. The goal is to functionally create a faithful reproduction of the original. That is, on the Spectrum/QL side, operating the emulated Microdrives should feel exactly the same as using the real thing. So by definition, it does not try to compete with more "modern day" mass storage solutions for Spectrum and QL.

For a quick introduction to the project, check out the landing page.

How Does It Work?

OqtaDrive is built around an Arduino Nano that connects via its GPIO ports to the Microdrive interface and via serial connection to a daemon running on a host machine. This daemon host could be anything, ranging from your PC to a small embedded board such as a RaspberryPi Zero, as long as it can run a supported OS (Linux, MacOS, Windows). The same Nano can be used with both Spectrum and QL, without any reconfiguration.

While the Arduino is essentially a low-level protocol converter, the daemon takes care of storing and managing the cartridges. It additionally exposes an HTTP API endpoint. A few shell commands are provided that use this API and let you control the daemon, e.g. load and save cartridges into/from the virtual drives. A web UI is available as well.

What Can I Do With This?

OqtaDrive's architecture makes it very flexible, so many setups are possible. The simplest one would be just the Arduino that connects your Interface 1 or QL with your PC, and you manage everything from there. This configuration also fits nicely into the case of an Interface 1. If you're rather looking for a stand-alone solution, you could for example run the daemon on a RaspberryPi Zero W, put it on a PCB together with the Arduino, and place this into a Microdrive or 3D printed case. The Pi would connect to your WiFi and you can control OqtaDrive from anywhere in your network.

Due to the minimal hardware required, OqtaDrive is also very cost-efficient. In the simplest setup, you only need an Arduino Nano and a few resistors and diodes. Additionally, if you own a Spectrum and a QL, you can use it with both, no need to have dedicated adapters. But above all, there's the fun involved in building this! If you've created your very own setup, then just head over to the discussion section and tell us about it!

Here's a short demo video showing OqtaDrive & a Spectrum in action, doing a Microdrive test with the original Sinclair demo cartridge image, and a cartridge format.

If you want to build OqtaDrive yourself, please carefully read the hardware section below! It contains important instructions & notes. Not following these may break your vintage machine and/or the Arduino! However, bear in mind that all the information in this project is published in good faith and for general information purpose only. I do not make any warranties about the completeness, reliability, and accuracy of this information. Any action you take upon the information you find here, is strictly at your own risk. I will not be liable for any losses and/or damages in connection with the use of OqtaDrive.

OqtaDrive is currently in alpha stage, and under active development. Things may still get reworked quite considerably, which may introduce breaking changes. If you find something not working as expected, check out the troubleshooting guide. You can also start a thread in the discussion section of this project to get some help form the community, or open an issue. 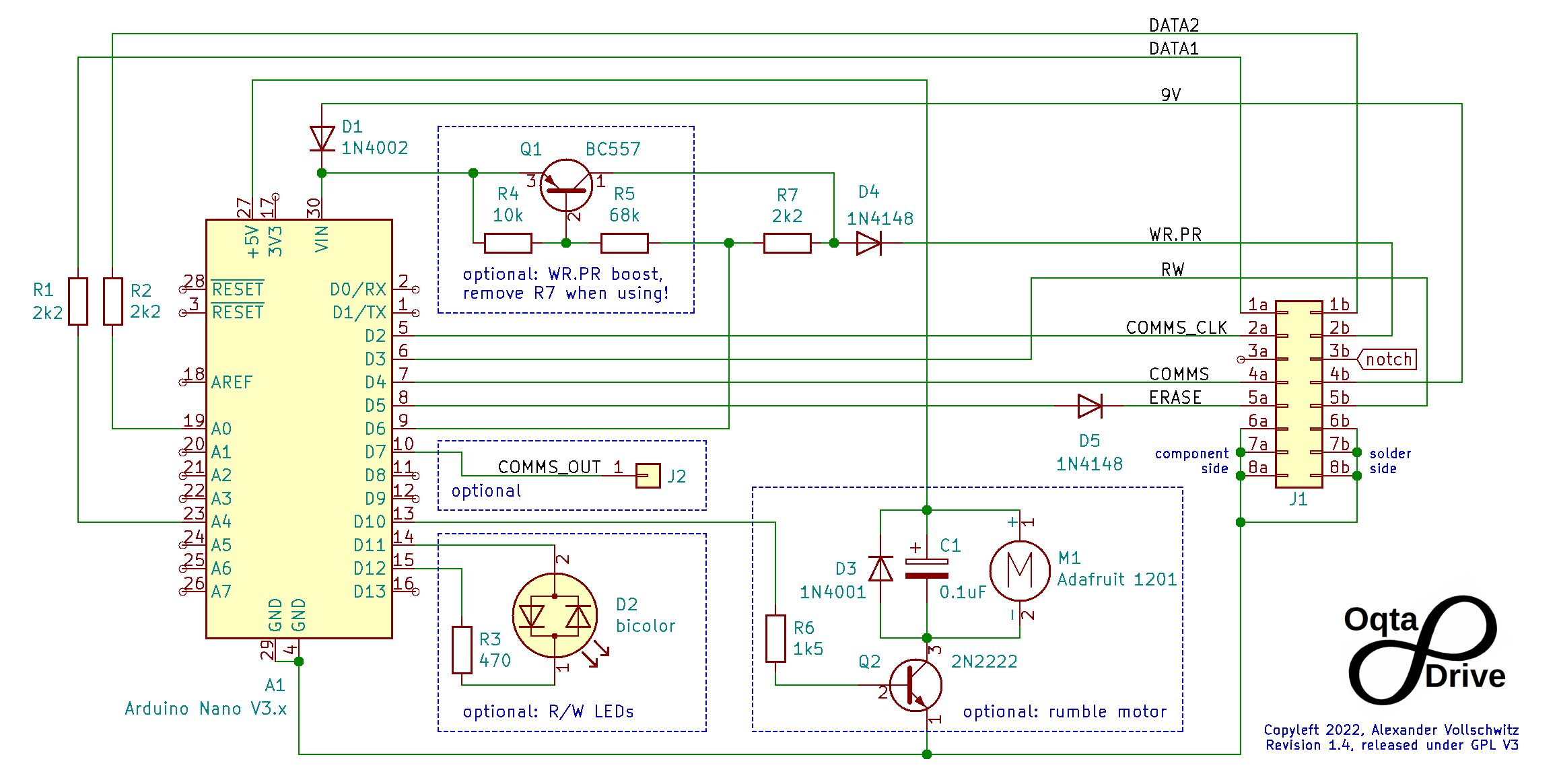 The circuit is fairly straightforward. The majority of the components shown in the schematic are optional. For essential operations, you only need to connect a few of the Arduino's GPIO pins to an edge connector plug, program arduino/oqtadrive.ino onto the board, and you're all set. Here are a few things to consider though, when building the adapter:

My overall recommendation: Build the adapter as shown in the schematic above to minimize the risk of damaging your vintage machine! Also, check out the choice of PCBs that were already created, and other build options.

The pin-outs of the Interface 1 and QL edge connectors are identical, so you can use the adapter with both. Note however that the incoming and outgoing edge connectors of a Spectrum Microdrive unit are different! They are in fact upside down, with the incoming connector additionally being mirrored. That's why the cable for connecting a Microdrive unit to the Interface 1 cannot be used to connect (i.e. daisy chain) two Microdrive units. If you want to use the adapter behind a Microdrive unit, you either need to wire it accordingly, or use an appropriate plug converter. Whichever you choose, fabricate it in a way that makes it mechanically impossible to accidentally plug it into an Interface 1 or QL. There will be damage otherwise!

This table shows the respective pin-outs (A = component side, B = solder side):

The adapter recognizes what it's plugged in to, i.e. Interface 1 or QL. But it's also possible to force a particular machine. Have a look at the config section at the top of oqtadrive.ino. There are a few more settings that can be changed. If you need to maintain several configs for various adapters, you can alternatively place your settings in separate header files. The details for this are also explained in the config section.

If you're planning to use OqtaDrive together with actual hardware Microdrive units, then there are essentially two choices for placing the OqtaDrive adapter - either at the end of the drive chain or at the start. Here are a few considerations and pros & cons for both options.

Using a Different Arduino Board

So far I have built OqtaDrives with Arduino Nano and Arduino Pro Mini boards (cheap compatible clones). It may work with other Arduino boards, but only if they use the same micro-controller (ATMega328P) running at the same clock speed (16MHz). There are timing-sensitive sections in the code that would otherwise require tweaking. Also, stick to the GPIO pin assignments, the code relies on this.

After building the adapter, the software needs to be installed. This comprises two separate tasks:

In the hack folder, there's a Makefile that can be used to perform all of above steps, so you don't even have to install the Arduino IDE. Currently, this only supports installation on Linux. For the standalone setup, there are also disk images available that perform an unattended install on first boot. For more details, have a look at the install guide.

The oqtactl binary can run the daemon as well as several control actions. Just run oqtactl -h to get a list of the available actions, and oqtactl {action} -h for finding out more about a particular action.

Start the daemon with oqtactl serve -d {serial device}. It will look for the adapter at the specified serial port, and keep retrying if it's not yet present. You can also dis- and re-connect the adapter. The daemon should re-sync after a few seconds.

When a cartridge gets modified it is auto-saved as soon as the virtual drive in which it is located stops. It is also auto-saved when it is initially loaded into the drive. Whenever the daemon is restarted, the previously loaded cartridges are automatically reloaded from auto-saved state and are immediately available for use. Keep in mind however that auto-save does not write back to the file from which a cartridge was originally loaded. This is because the daemon is not aware of that location, and would possibly not even be able to reach it (you can load cartridges via network). Auto-saved states are instead located in .oqtadrive within the home directory of the user running the daemon (exact location depends on used OS). It is up to the user to decide whether and where a modified cartridge should be saved (see save action below).

Daemon logging behavior can be changed with these environment variables:

The daemon also serves an HTTP control API on port 8888 (can be changed with --address option). This is the integration point for any tooling, such as the provided command line actions and the web UI. The most important ones are:

load & save currently support .mdr and .mdv formatted files. I've only tested loading a very limited number of cartridge files available out there though, so there may be surprises. For the Spectrum load can also load Z80 and SNA snapshot files into the daemon, converting them to MDR on the fly.

Hint: If loading a cartridge fails due to cartridge corruption (usually caused by incorrect check sums), try the --repair/-r option. With this, OqtaDrive will try to repair the cartridge.

You can load zip, gzip, and 7z compressed cartridge files. The archive format needs to be conveyed by the file extension. Note that if an archive contains more than one file, the first one is picked (whatever first may mean in the particular archive format). Also, password protected archives are not supported.

In addition to uploading a cartridge file to the daemon in order to load it into a virtual drive, it is also possible to just send a reference to it. Simply provide this reference instead of the path to the cartridge file. The daemon will then retrieve it accordingly. The type of reference is indicated by a schema prefix, and determines how the cartridge will be fetched:

When the ui folder containing the web UI assets was deployed on the daemon host alongside the oqtactl binary, the daemon will serve the web UI on http://{daemon host}:8888/ (port can be changed with --address option).

Note: When using the ui folder from this git repo, and not from the release archive, make sure to run make ui before deploying. This will create all generated UI assets, such as minified JSON.

On Linux you can use the Makefile in the project root to build oqtactl, the OqtaDrive binary. It also supports building the firmware and uploading it to the Arduino. Note that for consistency, these build actions are done inside Golang and Arduino CLI build containers, so you will need Docker to build, but no other dependencies. Just run make to get online help about what's available and what options to use.

You can also cross-compile for MacOS and Windows. Run CROSS=y make build in that case. If you want to build on MacOS or Windows directly, you would have to install the Golang SDK and Arduino IDE or CLI there and run the proper commands manually.