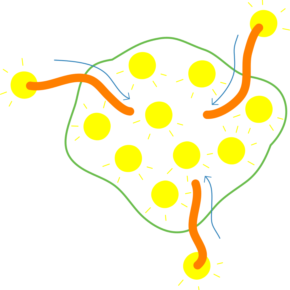 Art::World is an attempt to model and simulate a system describing the interactions and influences between the various agents of the art world.

It tries to draw a schematization of the interactions between art, institutions, influences and unexpected parameters during the social processes of artistic creation.

More informations about the purposes and aims of this project can be found in it's Art::World::Manual. Especially, the HISTORY and the OBJECTIVES section could be very handy to understand how this is an artwork using programming.

This is were all kind of weird phenomenons happen. See the Manual about how it works.

Provide a aquire method requiring some money. All this behavior and attributes are encapsulated in the Buyer role because there is no such thing as somebody in the art world that buy but doesn't sale.

If it's collectionable, it can go to a Collector collection or in a Museum.

The Crud role makes possible to serialize most of the entities. For this to be possible, they need to have a corresponding table in the database, plus they need to not have a unserializable? tag attribute. A Zydeco tag role is a role without behavior that can only be checked using does.

The Crud role is made possible thanks to Teng, a simple DBI wrapper and O/R Mapper. Teng is used through it's schema loader that directly instanciate an object schema from the database.

When trying to update a value, it is necessary to pass a table name and a hashref of attributes. The table name is not case sensitive.

Note that it is extremely important that the testing of the database should be done in the t/crud.t file. If you want to test database or model functionnalities in other tests, remind to create objects by specifiying the config parameter that use the test.conf file: only the database referenced in test.conf will be available on cpantesters and art.db wont be available there, only t/test.db is available.

All the necessary attributes and methodes for having fun between Art::world's Agents.

Role for Places that display some Artworks.

Fame role provide ways to control the aura and reputation that various Agents, Places or Works have. Cannot be negative.

It has an handy bump_fame() method that self-bump the fame count. It can be used in three specific maneers:

If you try to update the fame to a negative value, nothing happens and a nice warning is displayed.

The fame can be consummed by pretty much everything. A Place or and Agent have a fame through it's reputation, and an Artwork too through it's aura.

Classes that consume Fame can have two different kind of attributes for storing the Fame:

It is all about offer and demand. Involve a price but should involve more money I guess.

A role for those who take care of exhibitions and other organizational matters. See how being a Manager influence an Agent in the CLASSES section.

They are the activists of the Art World, previously known as the Wildlife.

A generic entity that can be any activist of the Art::World. Provides all kind of Agent classes and roles.

The Agent got an a networking( $people ) method. When it is passed and ArrayRef of various implementation classes of Agents (Artist, Curator, etc.) it bumps the reputation attributes of all of 1/10 of the Agent with the highest reputation. If this reputation is less than 1, it is rounded to the $self->config->{ FAME }->{ DEFAULT_BUMP } constant.

The bump coefficient can be adjusted in the configuration through { FAME }->{ BUMP_COEFFICIENT }.

The default values can be edited in art.conf.

Will be what you decide it to be depending on how you combine all the entities.

Something in a Magazine of Website about Art, Exhibitions, etc.

In the beginning of their carreer they are usually underground and produce experimental art, but this can change in time.

After getting collected, artists become homogenic.

The artist got a lots of wonderful powers:

The base thing producted by artists. Artwork is subclass of Work that have a Showable and Collectionable role.

Where a lot of theory is written by Critics

They do stuff together. You know, art is not about lonely Artists in their Workshop.

Concept is an abstract class that does the Abstraction role.

A special kind of Agent that can select Artworks, define a thematic, setup everything in the space and write a catalog.

An Event that is organised by a Curator.

Since it implements the Buyer role, a gallery can both acquire() and sell().

A Place that came out of the Underground.

Yet another kind of Place, an institution with a lot of Artworks in the basement.

A Place must invite() all kind of Agents that produce Work or other kind of valuable social interactions. Depending of the total reputation of the Place it will determine it's underground status: when going out of the underground, it will become an institution.

A generic space where Art::World Agents can do all kind of weird things.

A place were art world agents are doing things. A squat that is not underground anymore become an institution.

When some abstract concept turns to some said or written stuff.

There are not only Artworks. All Agents produce various kind of work or help consuming or implementing Art.

A specific kind of Playground where you can build things tranquilly.

A couple of utilities that makes a sort of meta-programming very simple. It is more like a reminder for my bad memory than something very interesting. Largely inspired by this Perl Monks thread.

Returns the class of the object.

Returns only attributes that are set for a particular object.

Returns even non-set attributes for a particular object.

Thanks to everyone who has contributed to ack in any way, including Adrien Lucca, Toby Inkster, Ezgi Göç, Pierre Aubert, Seb. Hu-Rillettes, Joseph Balicki, Nicolas Herubel and Nadia Boursin-Piraud.

This project was made possible by the greatness of the Zydeco toolkit.

This project is a self-teaching experiment around the modern Perl object-oriented programming toolkit. In late 2020, I read a bit about Corrina and immediatly wanted to restart and experiment my old Art::World project. While searching for something somewhat close to Corrina, since Corrina was only a draft and RFC, I discovered the incredible Zydeco project by Toby Inkster and immediatly felt very enthusiastic to use it to implement my idea. I hope it is a decent example of the possibilities this wonderful framework make possible.

This library is free software; you can redistribute it and/or modify it under the Artistic License 2.0.