pronounced you-block origin (/ˈjuːˌblɒk/) — you decide what enters your browser.

BEWARE! uBlock Origin is (and has always been) COMPLETELY UNRELATED to the web site ublock.org.

uBlock Origin is NOT an "ad blocker": it is a wide-spectrum blocker -- which happens to be able to function as a mere "ad blocker". The default behavior of uBlock Origin when newly installed is to block ads, trackers and malware sites -- through EasyList, EasyPrivacy, Peter Lowe’s ad/tracking/malware servers, various lists of malware sites, and uBlock Origin's own filter lists.

uBlock Origin (or uBlock₀) is not an ad blocker; it's a general-purpose blocker. uBlock₀ blocks ads through its support of the Adblock Plus filter syntax. uBlock₀ extends the syntax and is designed to work with custom rules and filters. Furthermore, advanced mode allows uBlock₀ to work in default-deny mode, which mode will cause all 3rd-party network requests to be blocked by default, unless allowed by the user.

That said, it's important to note that using a blocker is NOT theft. Don't fall for this creepy idea. The ultimate logical consequence of blocking = theft is the criminalisation of the inalienable right to privacy.

EasyList, Peter Lowe's Adservers, EasyPrivacy and Malware domains are enabled by default when you install uBlock₀. Many more lists are readily available to block trackers, analytics, and more. Hosts files are also supported.

Once you install uBlock₀, you may easily un-select any of the pre-selected filter lists if you think uBlock₀ blocks too much. For reference, Adblock Plus installs with only EasyList enabled by default.

On average, uBlock Origin does make your browser run leaner. [1] 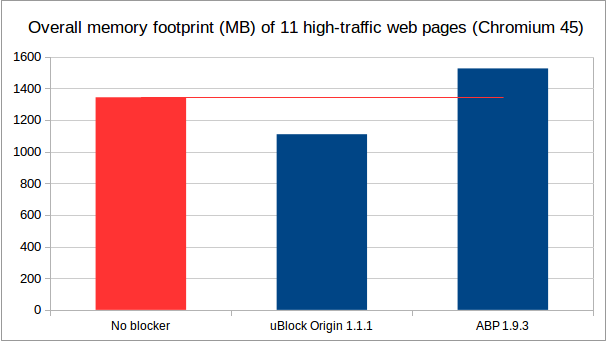 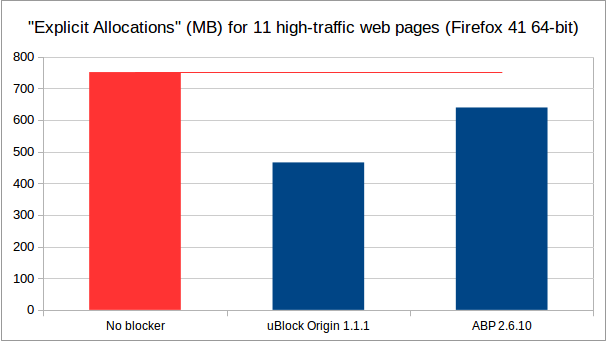 uBlock Origin is also easy on the CPU

Details of the benchmark available in this LibreOffice spreadsheet.

For details of benchmark, see uBlock₀ and others: Blocking ads, trackers, malwares.

Feel free to read about the extension's required permissions.

You can install the latest version manually, from the Chrome Store, or from the Opera store.

There is also a development version in the Chrome store if you want to test uBlock Origin with the latest changes: see uBlock Origin dev build.

It is expected that uBlock Origin is compatible with any Chromium-based browsers.

There is also a development version if you want to test uBlock Origin with the latest changes: for installation, see Install / Firefox webext / For beta version

uBlock Origin is compatible with SeaMonkey, Pale Moon, and possibly other browsers based on Firefox: for installation, see Install / Firefox legacy.

Thanks to Debian contributor Sean Whitton, users of Debian 9 or later or Ubuntu 16.04 or later may simply apt-get install xul-ext-ublock-origin.

Note that issues specific to the Edge fork are the responsibility of the current maintainer, I have no control over the code base of the fork.

Note that issues specific to the Safari fork are the responsibility of the current maintainer, I have no control over the code base of the fork.

Note for all browsers

To benefit from uBlock Origin's higher efficiency, it's advised that you don't use other inefficient blockers at the same time (such as AdBlock or Adblock Plus). uBlock₀ will do as well or better than most popular ad blockers. Other blockers can also prevent uBlock₀'s privacy or anti-blocker features from working properly.

Below is documentation to assist administrators in deploying uBlock Origin:

See the releases pages for a history of releases and highlights for each release.

Free. Open source. For users by users. No donations sought.

Without the preset lists of filters, this extension is nothing. So if ever you really do want to contribute something, think about the people working hard to maintain the filter lists you are using, which were made available to use by all for free.

You can contribute by helping translate uBlock₀ on Crowdin.