slatian
/
game.tetris
Fork 0
Code Issues Pull Requests Releases Activity
A simple tetris game using the cs1graphics library (cs1graphics.org) written in python. This started as a school exercise … https://slatecave.net/creations/tetris/
You can not select more than 25 topics Topics must start with a letter or number, can include dashes ('-') and can be up to 35 characters long.
10 Commits
1 Branch
0 Tags
144 KiB
Python 100%
Branch: master
master
Branches Tags
${ item.name }
Create tag ${ searchTerm }
Create branch ${ searchTerm }
from 'master'
${ noResults } 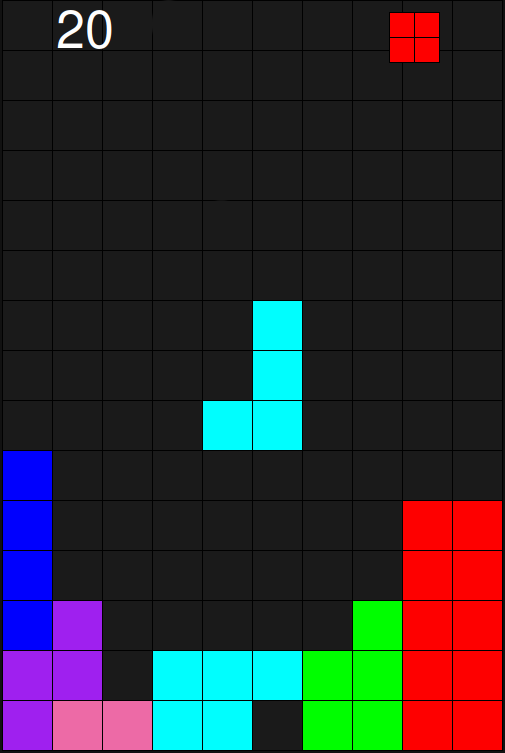 After starting the program the game immeadeatly starts.

You can control it using your usual wasd or the less usual ijkl as arrow keys.

If you hit the space key the falling pice will go to its final psoition.

Before talking avout the code, Apologies for the german names, this started as a school project for learning python.

The color scheme is defined in a dictionary called color_sceme near the end of the file. The color names are passed to cs1graphics, so look at their documentation for a reference sheet.

Look at the while loop at the end of the file, there is a call to the sleep function which defines the game speed.

To modify which shapes can fall from the sky there is an array that gets passed to the Steingenerator class which contains the names of the tiles in the game.

The mapping from name to shape happens in the Stein class in the setType function.

The mapping from pressed keys to commands happens in the handle function of the FeldZeichner class.

The commands are interpreted in the cmdCallback function of the Feld class.