Python Koans is a port of Edgecase's "Ruby Koans" which can be found at http://rubykoans.com/. 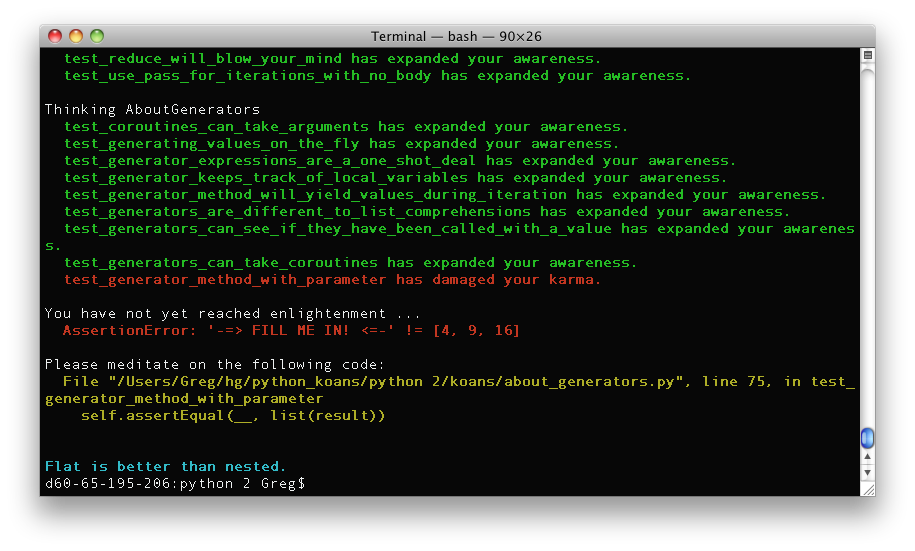 Python Koans is an interactive tutorial for learning the Python programming language by making tests pass.

Most tests are fixed by filling the missing parts of assert functions. Eg:

which can be fixed by replacing the __ part with the appropriate code:

Occasionally you will encounter some failing tests that are already filled out. In these cases you will need to finish implementing some code to progress. For example, there is an exercise for writing some code that will tell you if a triangle is equilateral, isosceles or scalene.

As well as being a great way to learn some Python, it is also a good way to get a taste of Test Driven Development (TDD).

Python Koans is available through git on Github:

It is also mirrored on bitbucket for Mercurial users:

Either site will allow you to download the source as a zip/gz/bz2.

Aside from downloading or checking out the latest version of Python Koans, you need to install the Python interpreter.

At this time of writing, there are two versions of the Python Koans:

You should be able to work with newer Python versions, but older ones will likely give you problems.

After installing Python make sure the folder containing the python executable is in the system path. In other words, you need to be able to run Python from a command console. With Python 2 it will be called python or python.exe depending on the operating system. For Python 3 it will either be python3 or for windows it will be python.exe.

If you have problems, this may help:

Windows users may also want to update the line in the batch file run.bat to set the python path:

Jake Hebbert has created a couple of screencasts available here:

Or if you prefer to read:

From a *nix terminal or windows command prompt go to the python koans\python_VERSION folder and run:

In my case I'm using Python 3 with windows, so I fire up my command shell (cmd.exe) and run this: 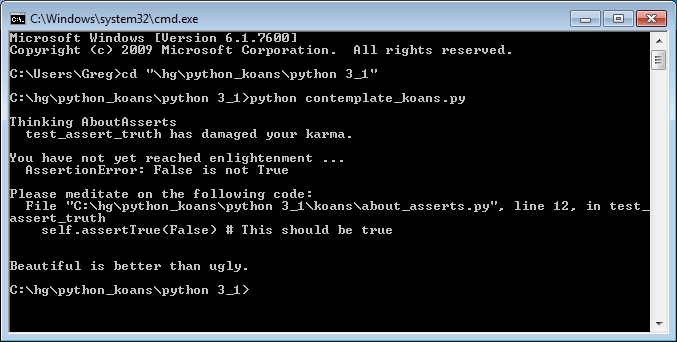 It also tells me exactly where the problem is, it's an assert on line 12 of .\koans\about_asserts.py. This one is easy, just change False to True to make the test pass.

Sooner or later you will likely encounter tests where you are not sure what the expected value should be. For example:

This is where the Python Command Line can come in handy. In this case I can fire up the command line, recreate the scenario and run queries:

Sniffer allows you to run the tests continuously. If you modify any files files in the koans directory, it will rerun the tests.

To set this up, you need to install sniffer:

You should also run one of these libraries depending on your system. This will automatically trigger sniffer when a file changes, otherwise sniffer will have to poll to see if the files have changed.

(If that failed, try:

Once it is set up, you just run:

Just modify one of the koans files and you'll see that the tests are triggered automatically. Sniffer is controlled by scent.py

Getting the Most From the Koans

The Python Koans is a made up of about 2/3 Ruby Koans ported material and 1/3 Python specific tests. The content ported from Ruby Koans includes all the assignment projects.

Content for Python 3 is a little different to the Python 2 flavor due to big changes between the two different versions of the language. For example, in the Python 2 variant the differences between old and new style classes are covered. This loses relevance in in the Python 3 version, but there are some extra tests covering new functionality.

There are number of other great Koan projects out there for various languages and frameworks. Most of them can be found in github. Also there is a little koans activity on bitbucket.

Thanks go to Jim Weirich and Joe O'Brien for the original Ruby Koans that the Python Koans is based on! Also the Ruby Koans in turn borrows from Metakoans so thanks also go to Ara Howard for that!

Also thanks to everyone who has contributed to Python Koans! I got a great headstart by taking over a code base initiated by the combined Mikes of FPIP. So here's a little plug for their very cool Python podcast: