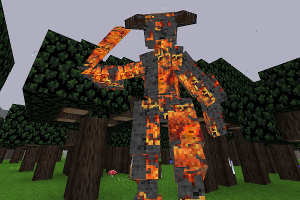 This mod added a configurable big BIG moster to defeat, taken it from the Lord of The Rings game and reworked it a bit.

was originally made by Hamlet but abandoned, now minimal fixed for VenenuX minetest game, https://forum.minetest.net/viewtopic.php?f=11&t=18459

Spawn chance: 1 in half a million (twice the chance of being struck by a lightning in real life) under -1500 on the ground

The mob is configurable by settings, check settingtypes.txt file.