This is an application to set up a Raspberry Pi server as a timer. Due to the unique requirements for the timer we use, this is the latest version of a long-running project to provide a usable timer with minimal points of failure.

Until recently the server was controlled remotely with, and displayed the time on, Arduino-based remote clients, but a catastrophic failure of the Arduino libraries used for controlling LCD displays has made that technology much less reliable. The Arduino remote is still viable, thanks to the M5Stack IoT platforms.

So the current plan is: set up a Raspberry Pi server with a composite monitor (or rather multiple monitors connected using consumer-grade composite video distribution/amplifier products); use the Arduino remote to control the timer; and set up the screens on stage to be visible to the speakers. 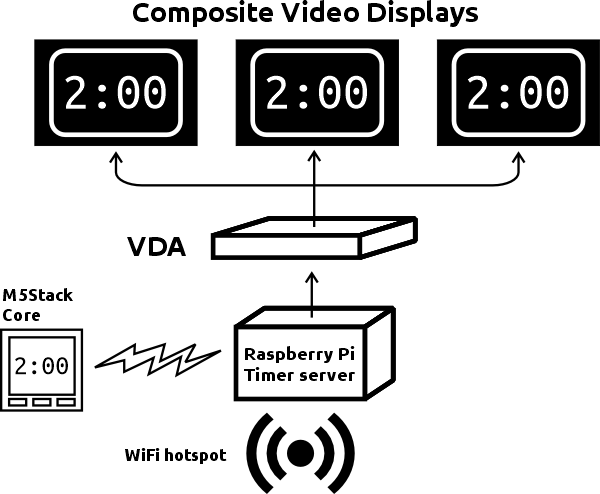 With the caveat that this documentation is still being worked out, here are the general steps.

Note that by default the hotspot will be inactive, so that you can continue server setup before you start using the timer.

Once the setup is complete, you may start up the timer using the hotspot control script. The command hotspot on will activate the services needed to run the WiFi hotspot, and then reboot the machine. Running hotspot off will put the configs into their original state, to allow you to get back into the server for admin. (Note that connecting to the server while it is a hotspot may involve you either connecting to the hotspot to ssh into the box, or attaching a monitor and keyboard to your RPi.)

The Python timer display script should automatically start up when the RPi server reboots. If your server is connected to a composite monitor you should see the timer window, showing the current time as stored on the local HTTP server.

If you need to connect to the server while the hotspot is active, hitting the Escape key will close the timer window and bring you back to the desktop.

The hotspot config allows for an Arduino admin client to connect to the RPi and control the timer via the HTTP server. The ESP32 boards manufactured by M5Stack will be supported because they provide a simple all-in-one hardware product that can be used for the control.

This server is designed to run on a vanilla Raspberry Pi desktop install. The stuff that will be built and installed:

Distributed under the MIT License. See LICENSE.txt for more information.