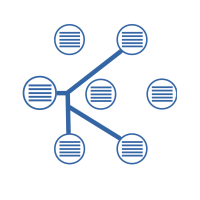 IP Multicast is based on UDP, which is inherently unreliable. Packets may arrive out of order, or not at all. TCP provides unicast with a reliable messaging layer on top of this unreliable, connectionless medium.

Unicast, however, is one-to-one only. Multicast could, in theory, use all of the same reliability options (ACKs etc.) as TCP, at the cost of not being scalable any more.

Fortunately there are other ways to achieve similar reliability. RFC3208 describes Pragmatic General Multicast (PGM) based on NAKs (negative acknowledgements). This, too, has scaling issues.

Thanks to parity checking in the network stack, we don't generally need to worry about errors within packets. Every packet has a checksum, and if that doesn't match, the packet is dropped before it reaches us. Our encryption provides further checking of data received. We need only concern ourselves with erasures. ie. dropped packets.

RaptorQ is an implementation of a class of systematic erasure codes called fountain codes.

Provided the recipient receives at least a minimum value K' of these symbols (any unique combination of source and repair) the intermediate symbols can be reconstituted, and the original data recovered.

RaptorQ is what is called a systematic encoding, because the set of symbols we send includes our original data as plain text. Provided all source symbols are received, the original data has been transmitted with no decoding overhead. It is only in the case where we need to supplement the source symbols with repair symbols that we must perform the decoding process.

The code compiles using either gcc or clang. There is a make clang target. The default is whatever your default CC is.

To best performance, you will want to set some CFLAGS appropriate to your platform. Something like:

can make a huge difference.

To build with SIMD enabled (highly recommended), append --enable-simd to your configure command. You must enable at least -mssse3 to use this. -march=native is probably a better bet.

Putting that all together:

A rough indication of encoding and decoding performance can be garnered by running make speedtest. This is useful for observing the effects of various optimizations. It is not a proper benchmark test.

Users of *BSD will need to use gmake instead of make. gmake test requires bash.

This project was funded through the NGI0 Discovery Fund, a fund established by NLnet with financial support from the European Commission's Next Generation Internet programme, under the aegis of DG Communications Networks, Content and Technology under grant agreement No 825322. *Applications are still open, you can apply today*