Here we summarize briefly what rule engines are and how you can use them to nicely implement abstraction layers into your data. We also point out how you can build a distributed and scalable computation network based on the MQTT data.

Rule engines are meant to be applications running completely in the background. They run on one of many computers which are connected to each other by a computer network. Rule engines do not interact directly with the user. Their function is to subscribe to a set of topics, watch their updates and trigger a routine, which calculates something based on the input topics and finally publish the result(s) to output topics. The output topics then can trigger other rules or rule engines. The rule engines also can perform actions on the machine they are running, like executing shell scripts when a topic content matches a certain pattern, or accessing the hardware connected. 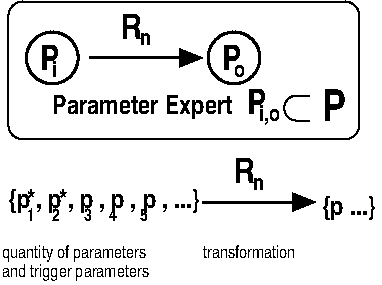 A rule is a transformation algorithm together with a set of input parameters (or topics) and a set of output parameters. A subset of the input parameters can trigger the algorithm. The rule is usually triggered whenever the content of such an input trigger-topic has changed. A rule algorithm is calculated in no time (which means, the algorithm must not yield or halt its execution and must process as fast as possible) and immedeately publishes its results.

A rule engine is a process running on any computer connected to the broker, which can execute one or more individual rules.

With multiple rule engines running even on different computers using the same broker, one can implement a full automation control, which would create the Internet of Things. (See also: MQTT Hyperdash automation concept)

All rules together form a rule network, or a rule graph. 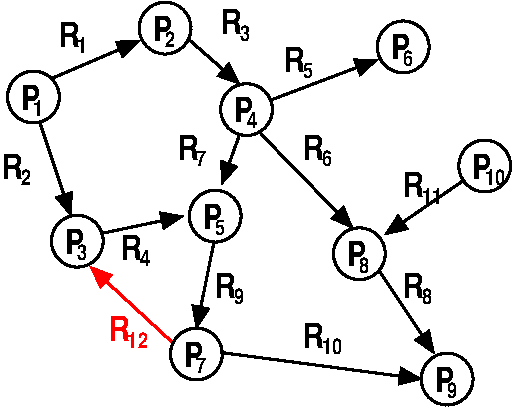 If the graph has cycles, this would mean, that the rules can trigger themselves in an potentially endless loop. Except for special cases, the rule graph must be designed to not have unintended cycles, otherwise the parameters have undefined values and the whole rule subgraph becomes unstable.

However, If you can make sure, that the cycle will always come to an end, e.g. when the algorithm as a whole converges on the input parameters, then a cycle might be an interesting concept to implement (slow) control loops for the automation.

The concept of rule engines is not new and can be found in other automation concepts as well.

The MQTT-Hyperdash implementation is focused on high performance, quick reaction and reliability. In addition, using them is not very complicated.

MQTT-Hyperdash provides a framework with which you can very quickly define and program rule engines. You only need to specify the main code fraction of your algorithm, and the framework will take care of collecting all data, trigger your routines and publish the results. For the rule itself the data is available as if they were stored in normal variables to calculate with. No communication overhead need to be programmed. The performace is hence as high as all other programs written in C, the language all successful computer operating systems are written in. We have chousen the C language for performace reasons. As a result, the rules (defined in the .rule files) are valid C code and will be processed by the C compiler.

You can make three kinds of rule engines:

The three kinds are not sharply separated. Any grade of mixture of these three base concepts can be realized. The rule engine framework allows to stuff any number of individual rules into a single process (executable).

There are four example rules provided with this package to demonstrate the usage in any of these cases:

The rule engine framework, with which the rule programmer will not come in touch subscribes to all TOPICs defined and collects permanently all data which arrives. If a trigger TOPIC gets a message, a snapshot of all data available at that time on every TOPIC defined is collected into a snapshot data structure and the rule function is executed. The results are expected to be stored in the snapshot data structure and finally the framework publishes the content of the defined output TOPICs, but only if the content has changed! If the rule comes to the same results, it will not get published again. This prevents other rules to be triggered unnecessarily with the same value and also saves network bandwidth.

You want to have a look at src/demo.rule. This es everything needed to implement and make a simple rule. The rule will be compiled into a native executable with

The file demo now can be executed, but it should not print anything to the terminal console, because besides debug messages there is no direct output or input via the console.

If you see an error message, make sure that you run a broker on the machine (localhost) and that the access rights are correct.

You can as well execute demo in the background, e.g. like this:

I have put mine in the crontab, so the automatically start at boot (on a Raspberry pi):

The "--persist" option makes the rule engine not giving up on connecting to the MQTT-broker even when the broker server is not yet available a atartup time of the rule engine.

The magic not happens in the background. To see what happens, please open three terminal windows:

If demo is running, you should see an update here every second counting from 0 to 3. This indicates that the demo engine is running. (Maybe you want to make a dashboard, and put DEMO/ACTIVITY_DM to a BITMAPLABEL ...)

and in windows number 3 please enter

You should find the results update in window number 2.

Thats magic. Now you should be creative and think what you can do with this mechanism.

The rule engines consume nearly no CPU power, they are so fast, that changes are instantly trigger calculations on the fly. You can therefore run many (say 10 to 20) of them on a very weak Raspberry Pi.

You should take demo.rule as a template and modify it according to your needs. Also the other tree example rules provided are not very complicated and could serve you as a basis for your own tasks.

The rule syntax is C with some predefined macros. Rule files are actually original C files and they are compiled with gcc. So you can add any sub-function you need for calculation. And the stdlib including math is readily available.

This way the execution of the rule function can be very fast, and there are nearly no limitations.

For advanced use, the rule definitions allow an initialization functions which is called once at startup of the rule engine executable and can pass command-line parameters, ask for environment variables or open configuration files, if needed. The demo rule does not make use of it.

The rules are defined by filling an Array of data structures of following type:

The input and output topics of the rule are defined using this struct:

Maybe interesting is the qos parameter. It can make sense to set it to 2 in cases where the trigger must not get lost and must occur not more than once. However this slows the rules down quite a lot.

The rule takes the snapshot with the parameter contents using an array of this struct:

Where STRING is a very simple structure to hold a number of bytes:

Thats probably all you need to know about the underlying rule engine framework.

If you have questions or problems using this framework, please feel free to discuss this in the issues forum of this repository.