A first person game of blowing up asteroids. 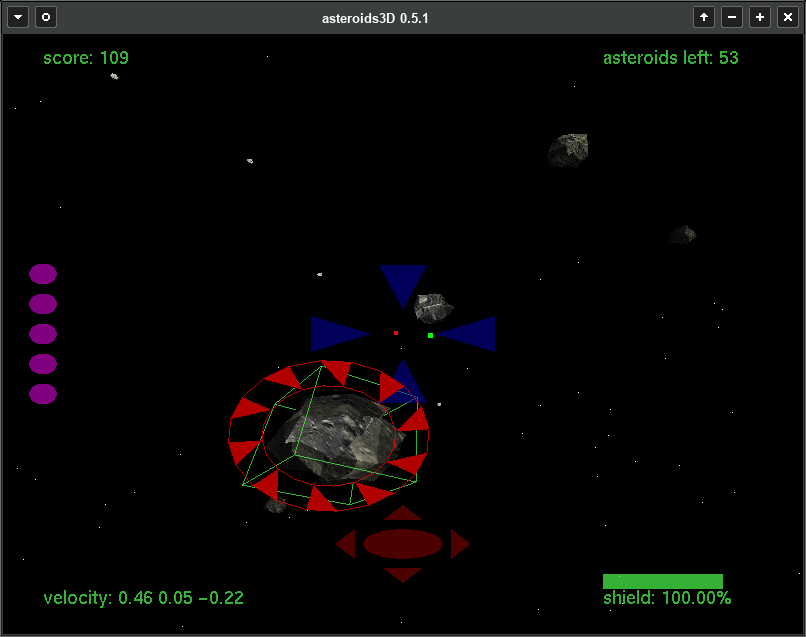 asteroids3D uses autoconf, so you can use the usual two-step. For running asteroids3D from the source directory, you need:

If you want to actually install it in the system, you could use:

If you need extra compilation or linking flags, you can pass them to configure using CFLAGS="your options" and LDFLAGS="opts" respectively. For example, to turn on debugging:

The object of the game is to stay alive and destroy all the asteroids in the asteroid field.

The mouse rotates your ship up, down, left, and right. The left mouse button fires your torpedo, the right one targets the asteroid in the crosshair, if any.

The position of your mouse is represented by a green dot.

The purple circles on the left represent torpedo slots. As you fire they will dim, letting you know that you have fired and a slot is reloading. You have five torpedos.

The number at the top center of the screen tells you how many asteroids are left in the field.

The collision warning indicator is at the lower center of your screen. There are four arrows representing above the ship, below the ship, to the left of the ship, and to the right of the ship. The oval represents directly behind you. If the dim red arrow (or the oval) lights up, then you know that an asteroid is near you on that side. For example, if the right red arrow lights up, then an asteroid is near you on your right side. It is good to move at a ninety degree angle away from close asteroids.

Finally, a group of numbers on the lower left corner of the screen represents your velocity vector (x,y,z) in m/s. Although this looks cool, it may not be of much use to you. You will be able to see if you are moving, though.

When you lock on to an asteroid:

The spot where your torpedo will be in the time it will take to reach the asteroid is represented by either a yellow (out of range) or red (in range) dot.

The spot where the asteroid will be in the time it will take your torpedo to reach the asteroid is represented by either a yellow (out of range) or red (in range) circle. The target circle grows and shrinks with distance to the target so that you have a more accurate idea of how big a target you need to hit is at a given distance.

Put the dot inside the circle when they are both red and voilà, you hit. There are a small number of cases where the aspect angle of the torpedo on the target is such that you will miss. And unless you are close enough, the torpedo may fizzle out before it hits. Additionally, the will-hit-or-miss-detection logic is simple, so it may happen that a torpedo might miss if the distance is close to the maximum possible distance while the circle is still red.

The targeted asteroid is boxed in green, and has a green line pointing in the direction it is travelling (its movement vector).