harrysentonbury
/
cutie-dead-synth
Fork 0
Code Issues Pull Requests Releases Wiki Activity
You can not select more than 25 topics Topics must start with a letter or number, can include dashes ('-') and can be up to 35 characters long.
master
v1.1
Branches Tags
${ item.name }
Create tag ${ searchTerm }
Create branch ${ searchTerm }
from 'master'
${ noResults }
cutie-dead-synth/README.md

Toggle between the key of E4 and C4. Swing between sine and triangle waves. Switch sine to an octave lower or some octaves higher.

Set Output Device, Blocksize and samplerate from the dialog accessed from the drop down menu. Maybe for a USB audio interface for example. Stuff > Set Output Device, Blocksize and Samplerate Click on the required device from the list then click Set / Close The blocksize can be adjusted with the slider. The blocksize is how many samples is passed to the sound buffer at a time. If the blocksize is too small you will hear skips or crackles because the buffer has not had enough time to be filled up before the next callback. If the blocksize is too big, there will be a lag between hitting the key and hearing the sound. Note: If you close the dialogue using the X in the top right corner, the stream will fail to restart. Reopen the dialogue, repeat your selection or whatever and click Set / Close to restart the stream. 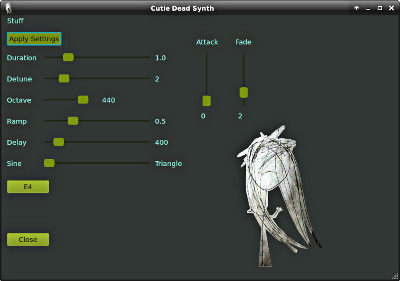 Save Notes as .wav Files

Click this button and it will create a directory named with a time stamp and sample rate then fill it full of wav files each containing the individual notes.