When is foot fast, and when is it not?

One of the "features" of foot is its speed, as is evident from benchmarks.

But is it really fast? And if so, is it always fast?

Foot currently renders everything on the CPU. As such, it should always lose out to GPU accelerated terminals, right? And it does, in most setups if we are comparing full grid updates (that is, when the entire terminal window needs to be redrawn).

Foot recently (available from 1.5.0) gained the ability to display a render timer on-screen, which makes it easy to see how fast foot is in real time. You can try it out for yourself by adding the snipped below to ~/.config/foot/foot.ini:

Here is an image that shows foot on the left, and Alacritty on the right. I have filled both screens with A. 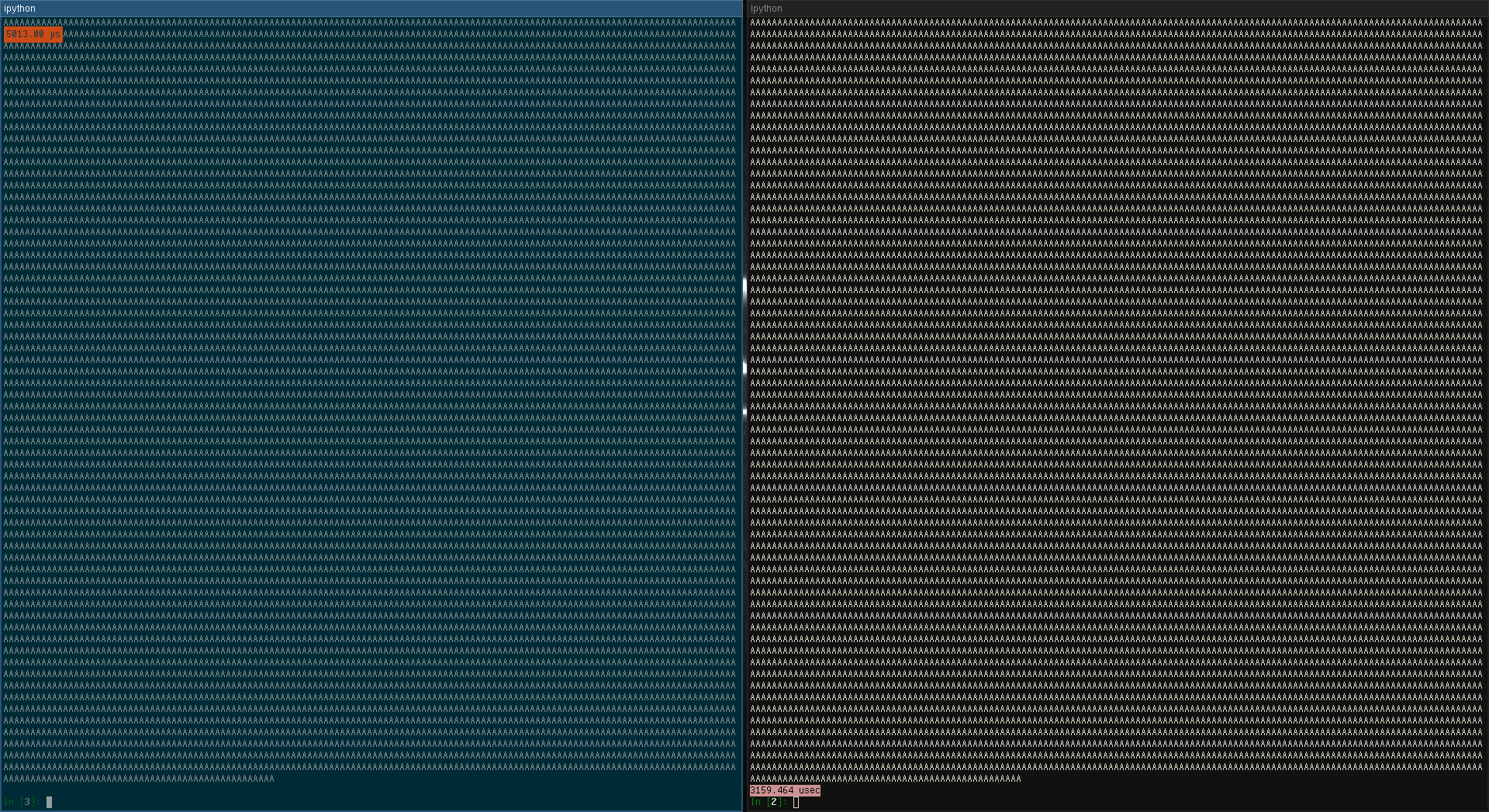 Both shows a render timer, foot in the upper left corner, and Alacritty in the lower left corner. This tells us how long the last frame took to render.

Note: I will be using Alacritty to point out differences, and to discuss design choices. Mainly because it is a modern, GPU-accelerated, Wayland native terminal emulator, with at least some goals common to foot's. And it has the ability to display a render timer on-screen, which makes it easy to use in screenshots.

So, if foot is so slow, how come it is also fast?

The answer is twofold. The speed of a terminal emulator depends on two things mainly: its VT parser, and its rendering engine.

Foot's VT parser is fast. Really fast. Truth to be told, it is probably the main reason foot is so fast in several of the vtebench benchmarks.

I wish I could take all the credit for this, but alas, I have had help from the compiler; building foot with profile guided optimizations boosts performance noticeably. But the VT parser's speed is also the result of doing performance analyses and tweaking the code. Here it seems there is always room for improvement.

The rendering engine in foot is, as we have just seen, not faster than lightning. However, most of the time, applications do not update the entire screen. If you are typing things on the command line, or editing a text file, only a couple of characters are updated each time.

Foot makes use of this information, and only renders the cells that have been updated. This is called damage tracking.

Here is another screenshot. Again, foot is on the left and Alacritty on the right. 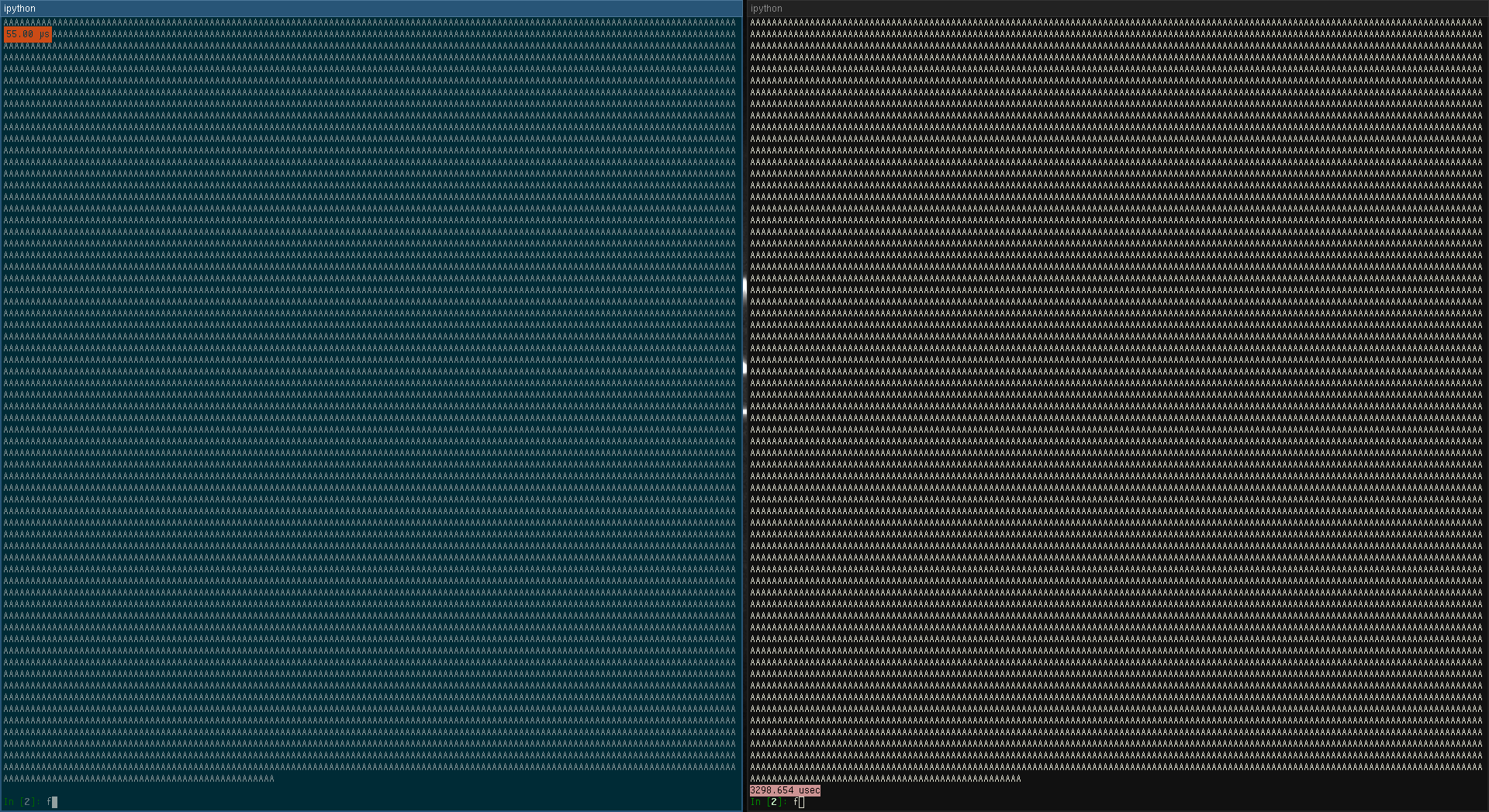 It looks almost the same as the previous screenshot. The difference is, in the first screenshot I had scrolled up and down in the scrollback history using Page+Up, to force a full grid refresh, while in this screenshot I just pressed f on the prompt.

As can be seen, there is no difference in the render time for Alacritty, while foot is significantly faster compared to the first screenshot.

This is because Alacritty does not do damage tracking; it always re-renders the entire grid. 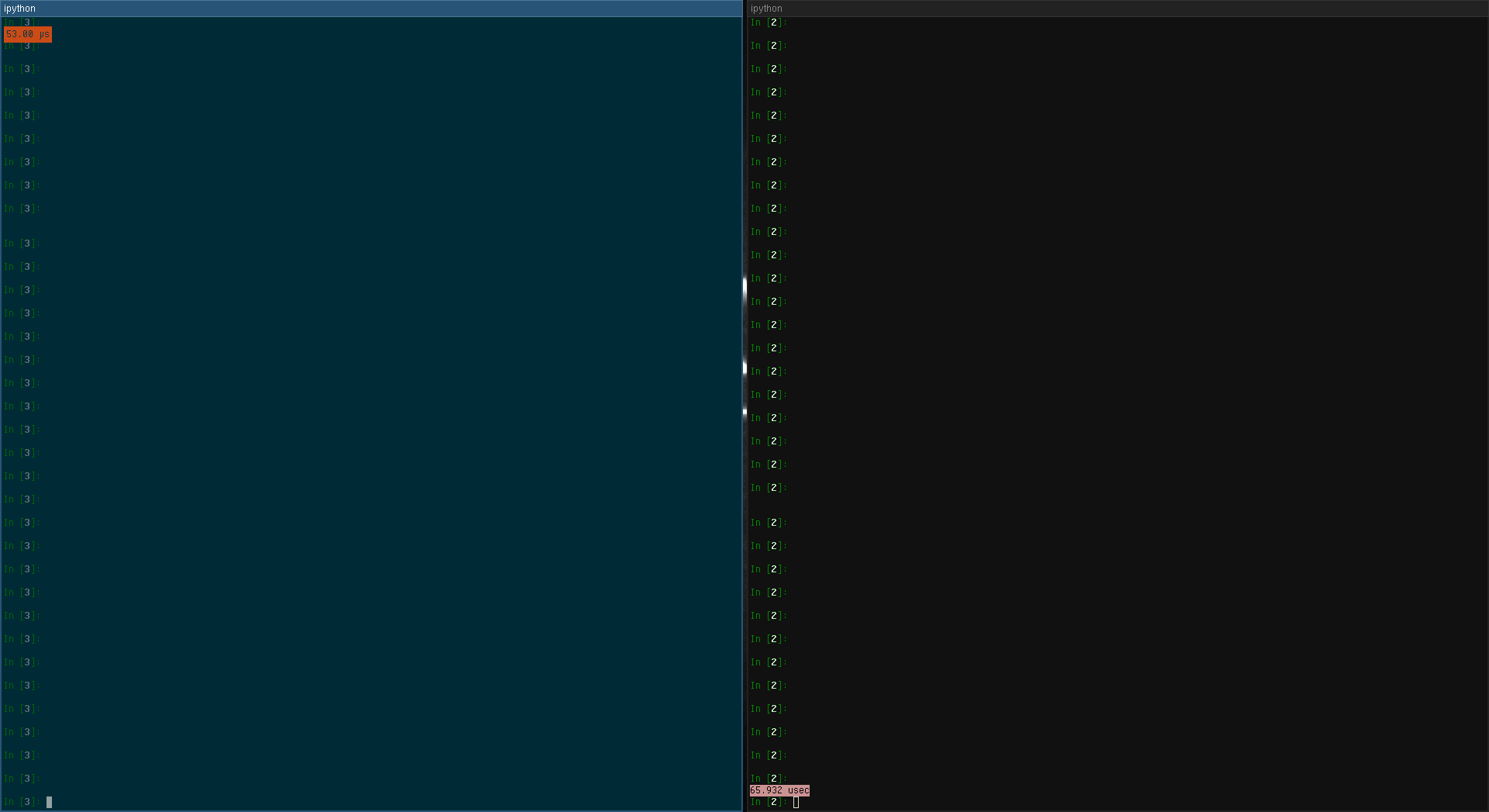 Both are fast! What happened? Did not Alacritty re-render the entire grid, every frame? Yes, it does, but it also is much faster at rendering empty cells than cells with glyphs in them.

In other words, in this screenshot, both terminals are fast, but for different reasons; Alacritty renders empty cells really fast, and foot does damage tracking and does not render anything but the last updated cells.

There is yet one more important thing to consider in the rendering engine: scrolling. By scrolling, I mean both scrolling up the content when you are at the bottom of the screen and e.g. presses return, and when scrolling up or down in the scrollback history.

Technically, scrolling results in a full grid update; every cell in the grid has changed.

However, by being clever, foot manages to render this without re-rendering the entire grid. Note that this is only true as long as some of the original content remains on the screen. If you scroll a page or more, there is no magic to be had, and foot is forced to re-render the entire grid.

Foot implements two algorithms for scroll damage (my name for it; custom damage tracking for scrolling).

On 64-bit platforms, where the amount of virtual address space is large, it implements a memory mapping trick to avoid large memory moves. You can read more about it in the TWEAK section in the foot.ini(5) man page.

This screenshot illustrates this. It is, once again, a screen full of As, where I have scrolled up in the scrollback history a couple of lines only, using the mouse. 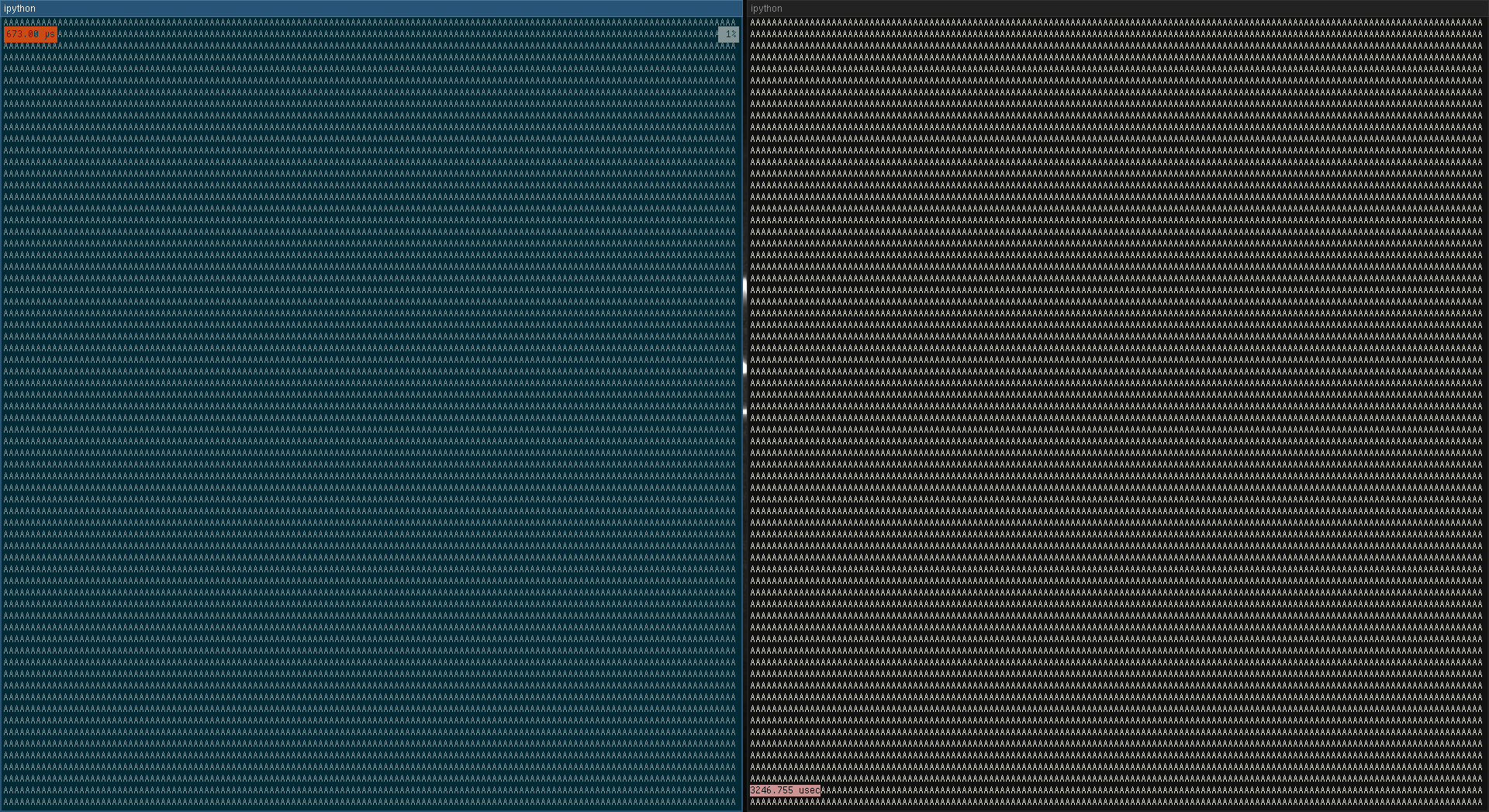 To summarize, foot is designed and optimized for interactive use. While it often is very fast in benchmarks too, this can mostly be attributed to its VT parser, which makes it handle "dumb" benchmarks, that just push lots of data to the terminal, very well.

Finally, it should be mentioned that while I was writing this, and taking screenshots, both terminal emulators had varying render timings. Most likely because I was doing this on a laptop in battery mode. I did try to pick timings that I believe are "normal". And, the point of this article is not to compare performance, but to point out what and how foot does things, and how it affects its performance in different situations.

One last thing: I encourage you to try the notcurses-demo from https://github.com/dankamongmen/notcurses. And do try it with the on-screen render-timer enabled!