The next artefact in our archive, and the next one I want to look at, is “Woodsmen”, posted by Zambies on the Hidden Street forums on 2007-08-12. The original post, in full, is as follows:

Alright so here goes. I've always liked beginners and I've had more than a few, but lately I've been wanting to try some jobbed beginners, I have a str mage already and thats going pretty well but I wanted to try a woodsmen, but alas I cannot find a guide or really anything other than "use a bow for knockback and get buff your accuracy" I need something more detailed or at least some help with AP assignment

Already in the second sentence, we see the term “jobbed beginner” used. This term will be important to keep in mind when creating our taxonomy, as it accurately reflects how certain odd jobs have been traditionally conceptualised and grouped together. Zambies goes on to imply that STR mages are part of this group. Based on the use of the term “jobbed beginner”, it seems that what Zambies has in mind is very similar to what are still known as woods(wo)men today.

The first two responses to the thread are somewhat confused, not understanding the original post, and Sevin asking what a “woodsman” even is. Majal goes on to define woodsman as “Perma begginer that is a Bowman. They dont shoot. They just take advantage of the acc.”. This conception of woodsmen (and indeed, most jobbed beginners in general) as being essentially permabeginners who take advantage of some minor, but significant, benefits of their chosen class — usually passive skills and buff skills — is reflective of traditional attitudes towards these jobbed beginners. The worry here is about WACC; STRginners have obvious WACC issues, as they want to put as much of their AP into STR as possible, but at the same time have nothing built into their class that helps them with WACC (unlike e.g. warriors, who can passively gain +20 WACC just from mastery skills). The bowman class would seem to help solve this problem: The Blessing of Amazon passively grants WACC, and Focus gives a hefty WACC (and AVOID, for that matter) buff on top of that. Unfortunately for the woodsman, archers gain less WACC per point of DEX, and per point of LUK, than a beginner does: 0.6 WACC instead of 0.8 per point of DEX, and 0.3 WACC instead of 0.5 per point of LUK. But this mechanic is not even mentioned in the thread, as its effect is quite minor at lower levels and with lower-powered gear (read: less DEX and LUK from gear), in comparison to the large constant effects of The Blessing of Amazon & Focus.

My guide to woods(wo)men is based on a more hybrid view of this odd job: one that is proficient in both melee and archery. But, looking at a more primitive attestation of the woods(wo)man odd job suggests that this hybrid view is more modern — or maybe not. One of the replies that I referred to as “confused” earlier, by pso_kik, mentions what they call a “strength bowman”: “Other than a strength bowmen (which means much less damage, but more stable), there's not much you can do with the archer class in terms of novelty builds.” The last part of this statement proves to be mistaken, but their description of a “strength bowman” as having much less damage, but more stable damage, is basically accurate to the ranged fighting style of woods(wo)men. But, at least when looking at this thread, there is no evidence of really putting two & two together here, and thinking of woods(wo)men as a hybrid melee & ranged job.

Argentin makes the last reply in the thread, explaining what a woods(wo)man is, and how to allocate AP for one:

Well a woodsman is a jobbed beginner.A jobbed beginner is a beginner that takes advantage of a class skill.so a woodsman is just a beginner with bowman skills.you will only need 25 DEX so you can get the first job and the rest you put into STR.you will only need DEX to fight other monsters but not to much.you can try adding twice DEX as you characters level or 4 STR and 1 DEX or 1STR and 2DEX.Your starting stats should be

The sentence “you will only need 25 DEX so you can get the first job and the rest you put into STR” is particularly notable here, for reflecting our modern conception of woods(wo)men as being pure STR archers. But again, similar to the “LUK Warrior” entry that we considered in §2, the emphasis is not on purity; it is accepted that any archer will need at least some DEX in order to get the WACC that they need to hit monsters.

Finally, I want to look at the next entry in chronological order: “Brandini's Islander Guide”, by Cacophobia (IGN MrBrandini), first published on 2007-11-05. This guide is a fairly straightforward guide to islanding (unfortunately somewhat uprooted by the later changes to Maple Island), but I want to focus on the “Builds” section.

The section starts by saying that “Most people assume there is only one build all Islanders follow which is going Pure Strength, they are wrong.”, and goes on to list five different builds: strength islander, dex islander, hybrid islander, magelander, and luck islander. The classification of usual types of islanders has been done many times, in various somewhat different ways, but this basically captures the kinds of distinctions that are usually made. This will become important later on, when trying to fit islanders into a taxonomy of odd jobs. These different “flavours” of islander, if you will, would almost certainly be considered subjobs by the definitions laid out in pt. i, but because islanders are such a primitive and core odd job, the classification of at least some of these subjobs proves to be an important task. And, furthermore, magelander in particular is so distinct from other islander flavours — and so old — that it is worth mentioning separately.

I tried doing a KPQ on my vicloc magelet d33r at level 21, and pretty much instantly regretted it. I felt so utterly useless that I set a task for myself: to level up and come back!

So I went to a nearby map (Caution Falling Down) to grind: 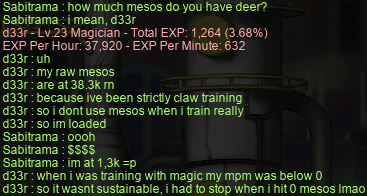 Having hit rock bottom, I was indeed forced to train with my anniversary event claw:

After grinding out a level or two, I thought I might make some progress on quests (without actually turning them in, as I wanted to save that for after KPQ, i.e. level 31+). Hopefully this would give me a nice break from the Octopus grind. So I went to collect ETCs for a level 15 quest, Don Hwang’s Request. Unfortunately for d33r, this didn’t turn out so well:

So I went back to the g-g-grind:

And eventually, I hit a much healthier level of 24!: 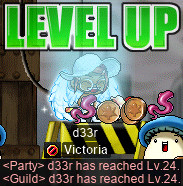 I wanted to get a zhelm for my LPQ mule and DEX brawler sorts — after all, what LPQ mule doesn’t have a zhelm? So I went to collect some gold teeth for the Zakum prequests, on my darksterity knight rusa. Along the way, I got quite lucky, and was able to quickly finish up my Riche card set!:

Once I had the teeth that I needed, sorts was off to the Door to Zakum:

Not pictured here is me soloing the first prequest (yawn), and also not pictured is me doing the second prequest, in order to save myself the embarrassment. But rest assured that I eventually did complete both, and got my five EoF (not to be confused with EOF):

And I bought an AFK Zakum run for her, and ended up with this slightly underwhelming helm, with no chance to reloot: 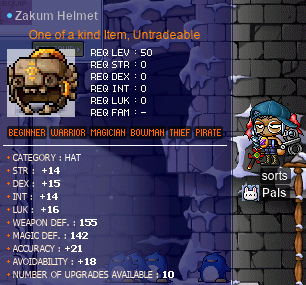 Now that d33r was level 24, it was time to head back to KPQ much stronger than before. Well, okay, maybe not much stronger…

In the previous diary entry, we saw cervid, my pure STR bishop, working towards getting Genesis, with help from Gruzz and xBowtjuhNL. The only thing that was left to do was the Horned Tail Party Quest (HTPQ), in order to get a special quest item (Life Roots) that drops from the monsters in the PQ.

Now that d33r graduated KPQ, it was time for some questing~ 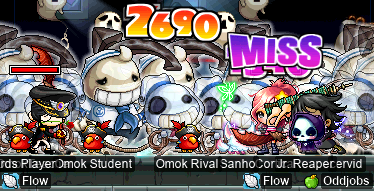 In which, during the second run, I was reminded just how difficult it can be to make Resurrection work. It appears that recipients of the effect get no temporary invincibility period whatsoever, and are of course dispelled upon death, making the resurrection very likely to result in an immediate second death… 🪦

So, usually, when I scroll/craft things, I get horrible results and often omit them from my diary entries. The ones that I do include have given me a reputation for being just awfully unlucky at scrolling, for no apparent reason… But today I have a slightly different story to tell.

Besides the 5/9 INT robe that I showed above, here are some other nifty 10%s that I managed to land on d33r: 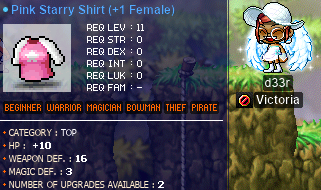 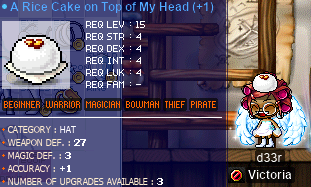 Not quite as impressive, and not impressive at all by outlander standards, but still pretty sweet.

And I scrolled this Maple Crow, which I had leftover from a box that I opened during the anniversary event, and didn’t want to upgrade because it was already perfect clean: 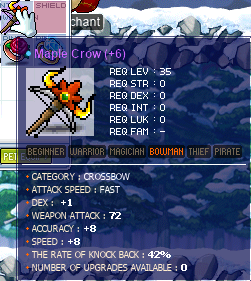 I have absolutely no personal use for it, but Yotsubachan made quite good use of it in LPQ!

I also forgot to mention in a previous diary entry that I made some Cursayers for my daggermit alces, and wound up making a 107 WATK one and a 108 WATK one! Bipp borrowed the 108 WATK one for a bit before he hit level 100 (GDK time!), and other than that, it has been waiting for alces to become unstuck from MPQ and hit level 90.

And last, but not least: The Skanda. I had, through my efforts during the anniversary event, gotten my hands on half a dozen clean Skandas, with a certain one of my characters in mind (I haven’t revealed her yet for a special reason, and she is not revealed in this entry for another, less special, reason: I’m too lazy), as well as Boymoder in mind, as she is a STRmit.

Now, CFA 30%s don’t come cheap, so I was prepared to pay a smol fortune to scroll these bad boys. As expected, the first two boomed on the first slot, and another one just failed the first slot without booming. Then I scrolled this one: 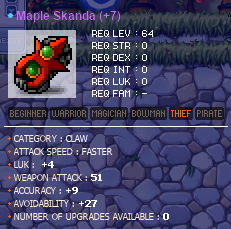 Yayyyyy~!! Now that is quite the Skanda!!! So good, it makes up for booming yet another Skanda on the first slot afterwards.

Alright, before you accuse me of making this character just because d33r didn’t turn out the way I envisioned, I will have you know that I was already planning and discussing this character before d33r even hit level 30…

Meet d34r, the dagger warrior. Cheesy as it may be, her name is actually two puns in one (d34r as in “dear”, but also as in “d33r+1”), so I couldn’t resist. Here she is, HPQing with fellow viclockers phloem (Jule) and Hailong: 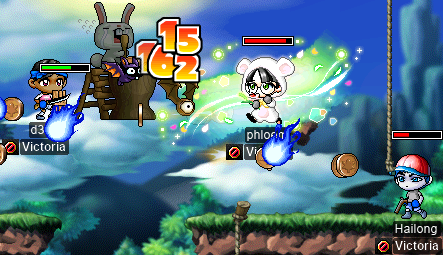 Once I had hit level 21, I headed towards Kerning City for the ol’ KPQ. Along the way, I took a slight detour to see if Mano existed:

Very nice. That will make the Mano quest a lot easier when I do it at level 31 or so.

I’m still very weak, but as expected, d34r is already turning out much more promising damage-wise in comparison to d33r… Right now, I plan on advancing to spearwoman so that we may one day go toe-to-toe with the biggest bad guy in Victoria Island, Ergoth. But Daggington is also going that route, so who knows. I may do fighter instead? :o