End of the V-day event

Now that the V-day event had come to a close, it was time to redeem all of those chocolates. I toyed with the idea of trading all of mine in for Unripe Onyx Apples, but because I was already getting a bunch of those anyways (from characters who were too low level to do the raffle), and because I didn’t feel like making another character just to hold apples, I spent all of the chocolates that I could on raffling. Here are my results (“gets” refers to the number of raffle instances that produced that item, whereas “qty” is the actual quantity of that item obtained across all raffles combined):

*The Friends of the Forest Camping Chair is untradeable and therefore useless.

So, obviously, this is prettty much crap. Of the things that are at least nominally useful, we have:

Gathering up ETC items for the Ellin Ring quest

I have, I think, four more characters who have yet to obtain an Ellin Savior’s Ring, who I want to eventually get one:

So I decided to just go ahead and collect all of the ETC items that I would need for the final quest in the chain, for all four characters. That means:

I actually collected all 400 Hardened Pieces of Steel, along with a little over 100 of the Firebomb Flames, while futilely attempting to complete the V-day chair quest on sets. For the rest, though, I hopped onto my I/L magelet, cervine:

I, naturally, got cervine a few cards along the way:

You already know what time it is: OPQ time!! My DEX spearwoman, rusa, was back at it again… Well, my buddy Introvertida invited me to OPQ, but when I got there, my spot in the party had been filled, so I farmed cards to get rusa from 0/5 Sentinel cards to 5/5:

And then it was time for a whole lot of OPQing…

And I met some lovely people along the way, like avocatto, Ooshy, Erebus0, ducklings (a permabeginner), nangs420, Gamericious, Came, and Kiona & MiniSushi! And I got to OPQ with some Suboptimal allies, like Ismezin, drainer, and Cortical (all permabeginners)!

My MPQ-mule-to-be, potpan, is still at LPQ going for that second pair of Broken Glasses. potpan herself is, perhaps, not very interesting yet: she won’t be able to fulfil her destiny until at least level 71, so for now, she just does obscene quantities of damage with Fire Arrow, and that’s about it. But I did join my DEXginner friend Gambolpuddy (Taima, Tacgnol, Boymoder, Yotsubachan, Numidium) there at LPQ:

And later, when Gambolpuddy had left — and indeed, most LPQers had left — I was forced, out of desperation, to run both potpan and sorts (my DEXaneer LPQ mule) if I wanted to keep LPQing. It was a little mind-bending for me, since I already have enough trouble controlling just one character, as it is, but I was able to bang out a solid 2 or 3 LPQs this way:

Which means that sorts was finally able to fulfil her destiny for the first time :P

OmokTeacher (Slime) may have defected once again, back to Flow, but we will remember That One Time™ that he left Flow to join the dark side — I mean, to join Oddjobs…

woosa advances to the rank of DEXgon knight

After many an OPQ, it was finally time for my DEX spearwoman, rusa, to advance to dragon — I mean, DEXgon knight.

On the way to & from El Nath, I stumbled upon a stray Fire Sentinel card and a stray Jr. Pepe card:

Here’s rusa, on the way to kick Dances With Balrog’s ass: 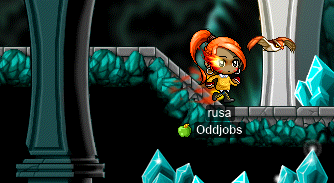 I’ve been screen-recording rusa soloing a variety of bosses (starting with King Slime), and eventually I will record enough to stitch together into a sweet YouTube video :) Her fight with Dances With Balrog will be in there as well~

As discussed in a previous diary entry, I have been debating rusa’s third job skill build. Having thought about it since then, and with NobleFantasm (SiriusPlaque, SmallMight) suggesting that it may even be possible for me to Heal myself (with cervid, my STR priest) at CDs, and with me actually remembering that rawr targets up to 15 monsters at once (much more than Fury’s 6), I have decided that I want rusa to have max rawr by the time that she hits level 86 (and thus graduates MPQ). I will be rushing to level 16 Fury before then (as Fury tends to be more useful in MPQ), but I decided to be a little greedy and put 3 SP into Sacrifice so that I could have level 1 rawr by the time I was level 71. Here is rusa, rawring for the first time, in the middle of an OPQ: 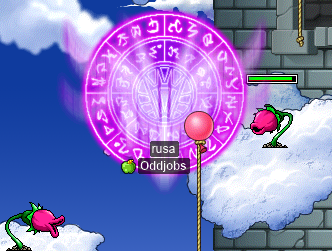 woosa MPQs for the first time~

And now that rusa had fatefully graduated from OPQ ;( it was time for her to MPQ for the first time, with EddieSmurphy the marauder, Gamericious (a priest, who I already knew from OPQ), and shinning the priest: 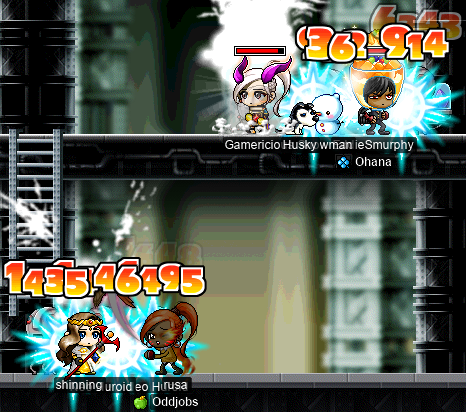 As usual, being both low-level (less than 77 or so) and being an odd-jobbed character made it a struggle to really contribute the the combat portions of MPQ. But, as always with rusa, I love being able to cast HB and IW on my party members, so that I can feel useful even when my damage is lacking :P 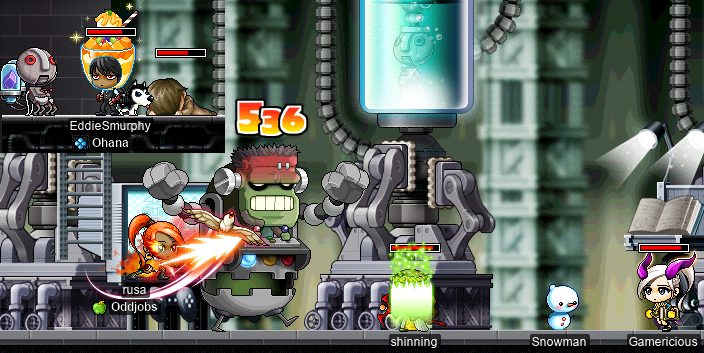 I’ve actually already completed the Ravana prequests on rusa, and I hope to tag along on some Ravana runs soon, so I can get some dolls, and hopefully a nice Ravana Helmet (rusa is still using a Rudolph’s Horn)~!