It was time to attempt even more Poison Mist training with my friend and guildmate Tacgnol the F/P gishlet (a.k.a. Taima, Boymoder, Gambolpuddy, Yotsubachan) in the Sutra Depository, section 5-6 F! With some experience under our belts, we’re gradually getting better at hitting these slippery, high-level monsters. Before starting, my I/L magelet cervine was already most of the way through level 98, so I hit level 99 pretty quickly: 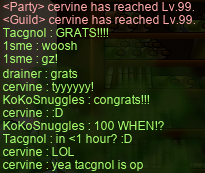 I did level up to 100 in (a bit) less than an hour, but we encountered a bit of a difficulty along the way. When I was some 92%~93% of the way through level 99, Tacgnol leveled up to level 105(!), which meant that we were more than 5 levels apart. Apparently, this screws up the EXP sharing, so I was stuck at exactly 92.68% (I think it was) for a while before I noticed, and drew attention to it. So we had to quickly (before our baskets ran out) shuffle over to STS (Shaolin Temple Square) to finish up my level 99: 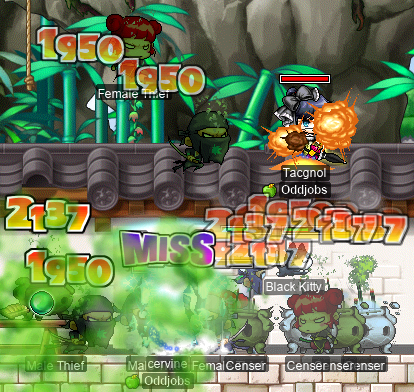 The mobs in STS are a bit less formidable (although still extremely high HP), so I was able to hit them and do reasonable damage with my normal attacks, like Ice Strike. And cervine hit level 100~! :D

I did a bit more card/event-ETC-item/rose hunting on my STR priest cervid. This time, I started at Luster Pixies, because I was 0/5 on their cards, and they drop Yellow Valentine Roses! Oh, and I managed to squeeze a White Chocolate out of one of them, which is always welcome (for some reason they are much more stubborn to drop for me than the other event ETC items):

I went from 0/5 to 5/5 Luster Pixie cards there (yay!), and so I moved to Chunins to hunt those instead:

As I expected based on my time killing Chunins with Tacgnol, they were a bit stingy with the cards, so I only ended up with 1 or 2.

Heading to MPQ with the crew

Ally (member of Flow, and thus of Suboptimal) sniper Level1Crook was trying to form a functional MPQ party, so I headed over to Magatia as my swashbuckler, alongside my STRmit friend Boymoder. When we got there, there were many vomits and throw-ups to be had: 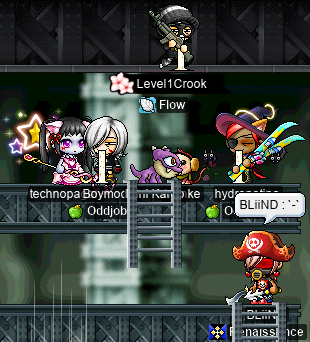 We were joined also by technopagan the priest (a.k.a. drainer, xX17Xx, maebee, all members of Suboptimal), and BLiiND the chief bandit (a.k.a. CaptainNemo, also a member of Suboptimal). BLiiND had to leave, though, so I was able to get a spot in this MPQ crew: 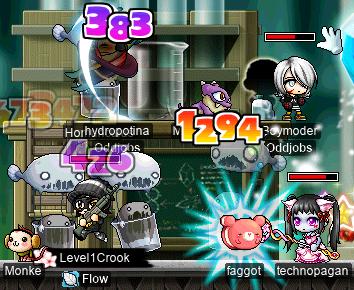 And so mae (technopagan) was able to get her first-ever MPQ experience and learn how it works! Unfortunately she had to leave after that, so we only got in 1 PQ. Thankfully, though, it was a “true ending”: we killed Angy Fanky, and saved our boy Romeo. Oh, and no one died!

Trying to use a basket on capreolina

Now that I had used a basket on cervid and cervine, I went to go use one also on my wood(wo)man, capreolina. It was a bit of a rough start, as I was looking around CDs maps looking for anyone to party with so that I could use my basket with them, but found no one (and didn’t find any open maps, either). But it was about to get worse, as I simply entered one of the CDs dungeons and used my basket there. I got in just about three minutes of solo grinding before my game client unexpectedly crashed: 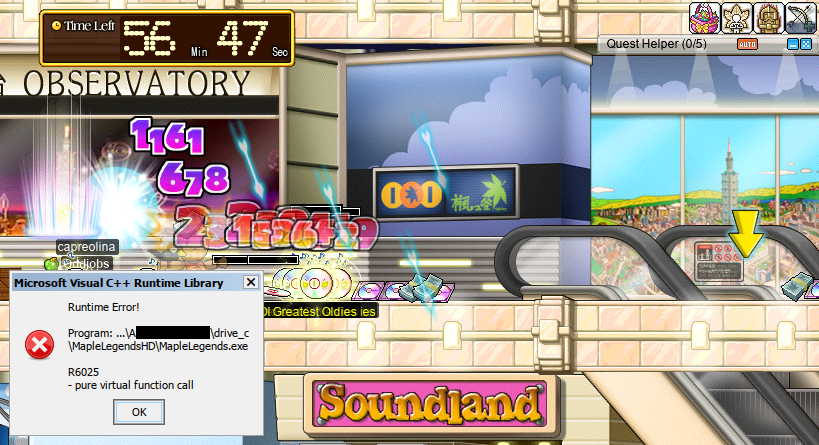 Apparently, this is a known, longstanding bug with the Puppet skill. Quite frankly, I never use Puppet, and I only have the skill because it’s a pre-requisite for my birdy. I decided, for no particular reason, to test it out real quick on CDs for the first time, and crashed within just one second of doing so. Let’s just say I’ve unbound Puppet from my keybindings… R.I.P. capre’s EXP~

Before I went to turn in my quest for another basket on cervine, I decided to do just a bit of event ETC hunting at the Henesys Hunting Ground:

rusa does the chair quest

And now that my DEX spear(wo)man rusa is free of EPQ (and thus able to gain EXP), it was time for her to do Romeo & Juliet’s chair quest! The first place I went to look for Love Tickets was at Cube Slimes, and the Cube Slimes were so kind as to almost immediately drop an amazing Korean Fan for me!!: 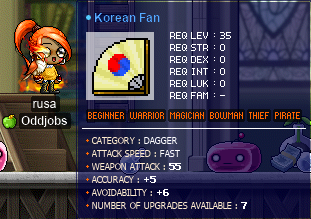 Over the course of the quest, I managed to finish the sets for both monsters in that map, Rumo and Cube Slime:

To wrap up the quest, I headed to HHGII to collect some cards and event ETC items there as well:

And I guess the rose gods smile upon rusa, because she could not stop getting those damn roses: