cervid solos the Spirit of Rock!!

You can watch the full struggle — I mean, fight — on the Oddjobs YouTube channel! 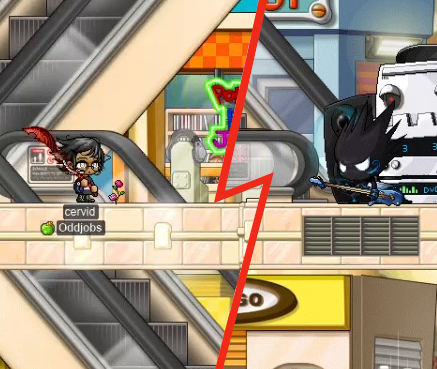 Our first party was us two, plus two pirates who were new to the server:

Later on, a fellow claw-wielding KPQer by the name of Gwisin managed to be rather impressed (or unimpressed…?) with my damage. I think she was confusing the damage number from each of my basic attacks with one of the two lines of a Lucky Seven:

…Little did she know, I was more DEXless than she even imagined!

Here I am, having a staredown with Gambolpuddy — although, I look more confused than fierce, at least in comparison to Gambolpuddy:

Shortly after having a staredown, we found out that, bizarrely, the F6 facial expression shows on top of the Smiling Mask:

In any case, we KPQed for quite a while. hashishi leveled up to 30!:

And we fully graduated KPQ (level 31): 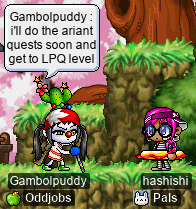 The Red Flowery Tube you see me wielding above was dropped on the ground next to the Mushroom Shrine gachapon. The 11 SPEED really helps me get around, even if I can’t exactly do damage with the thing, having 4 base STR and 4 base DEX. One’s trash is another’s treasure~!

In another episode of basket-using, I was grinding alone at CDs for a bit on my wood(wo)man capreolina. CDs are my go-to place because I know they’re overpowered, based on others’ treatment of the map and the people who I see training there, and tbh I don’t know where else to goooo~

With the HS from the basket, and me simply soloing a map full of CDs, I managed to reach an alarmingly high EPH of 5.5M!! :O

About a quarter of the way through my basket, I was joined by ally and permabeginner Gumby. I got enough experience on capre to hit level 104!!:

cervine wraps up the chair quests

I needed to do only a little bit more to finish Romeo & Juliet’s quest on my I/L magelet cervine. This now puts me at five total completions of the questline, haha:

Taima (Kelsey’s ultra-str0nk permabeginner) and I chomped some baskets and decided to grind together at Fancy Amps. We had a blast:

And Taima reported that her @epm recording read 2.59M EPH!! Quite a bit better than my usual duo with her, on my STR priest cervid, partly owing to the bonus event EXP, and partly owing to capre’s flurry of projectiles tearing the Fancy Amps to shreds.

To this point, I had managed to hunt two Red Valentine Roses, six(!) white ones, and a yellow one. I wanted to use these to complete at least two more rose sets, so when OmokTeacher (Slime, Slimu) remarked in alliance chat that he had way too many blue roses from grinding at Voodoos, I offered to trade two of my white roses for two of his blue ones. He insisted that the blue roses were truly worthless to him, and kindly gave me two for free!! Thank you~~

Similarly (and even more to my surprise), when I then sent out a smega offering to trade my white roses for a yellow one, Thanato kindly offered to donate me a yellow rose! When I met up with her in the FM to trade, I asked if she was also Satania, who I had met before with Tacgnol when we went to rose farm at Chunins (see the previous diary entry). She assured me that she was not Satania, but that I was not the first person to tell her that she looked like Satania. In any case, thanks so much Thanato for the rose!! Time for two more cute rings~