Ally Soblet was about to be done farming at Mushroom Garden around the time that I logged on, and they offered to give away their map. So, not entirely sure what I was going to be using the map for, I decided to accept the offer, since no one else was. Here’s my STR priest, cervid, farmin’ it up using her off-brand, dollar-store SR: 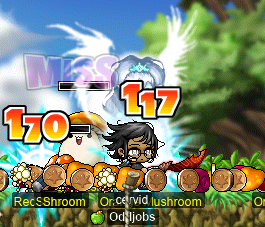 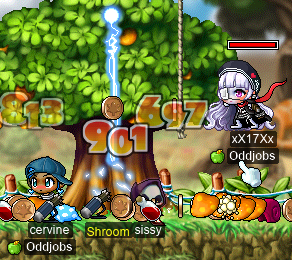 We also tried farming in some other locations, like at the Thicket Around the Beach II, as well as Right Around Lith Harbor. Because I was making so much use of Thunderbolt (normally, for damage, Ice Strike is my spell of choice, with Thunderbolt largely relegated to luring monsters), I decided to real quickly scroll myself a Pyogo Mushroom. I keep all of my staff/wand scrolls on cervine anyways, and because I normally rely on the elemental amplification from my Elemental Wand 3, a Pyogo would actually make me deal more damage with Thunderbolt than my usual elemental wand: 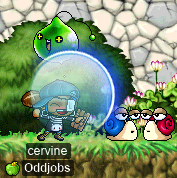 And later, I tried farming for Red Valentine Roses at The Burnt Land III: 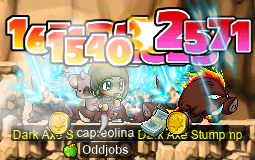 By the end of this session, I had farmed enough roses (and also thanks to help from my allies!) to complete three sets, so that I could get a Ring of Passion on cervid, capreolina, and cervine! I still have more characters left to grind for, though…

Trying out Voodoos with drainer

We also decided that trying out Voodoos would be a good idea; they don’t hit very hard, give decent EXP, drop Heartstoppers, and also drop Blue Valentine Roses! Here I am, farming Voodoos with drainer:

Healing a friend at CDs

A friend of mine, Sopooroh (a.k.a. Justinorino), was farming at CDs and needed someone to Heal for his rawrs, so I came to help out for a bit. When it came to splitting amongst us the NX tickets dropped by the CDs, I insisted that I didn’t need the NX: 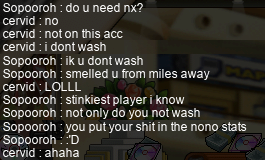 Then, I wanted to try out Romeo & Juliet’s quest for some sweet chairs. So I took my wood(wo)man, capreolina, to Magatia. And I got quite a few monster cards along the way :O

And after not too long, I could finally sit in my victory chair:

Since I already had my swashbuckler, hydropotina, in Magatia (for MPQ, as she is, still, in level range), I decided to do the same questline on her as well: 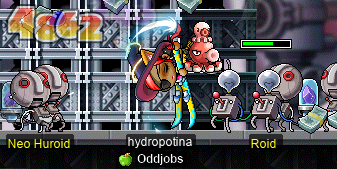 Oh, and I can’t forget to take care of Rurumo before it sends me back to town!: 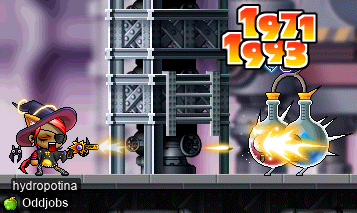 Farming at The Burnt Land III with Taima

And to end things here, I farmed some more at The Burnt Land III, this time with Taima (a.k.a. Boymoder, Tacgnol, Yotsubachan, Gambolpuddy):

We managed to farm up not one, but two glass shoes, as well as a Red Valentine Rose and two or three Love Tickets~!