Oh, you thought I was done with this series? No, no, no, we cannot stop until all ranged odd-jobbers have been covered!

In the diary entry before this one, we took a look at permarogues and permarchers, comparing odd jobs based solely on idealised single-target ranged DPS numbers at roughly level 100. Before that, we looked at wood(wo)men and compared bow-users (rangers, because the focus is on third job) to crossbow-users (snipers) when it comes to ranged DPS — although wood(wo)men are, of course, also adept at melee, like their STR mage and permabeginner cousins. And in a much older diary entry (pt. iv), we even took a look at how STRmits stack up in terms of ranged DPS. In this entry, I want to take a look at (and compare) two more odd jobs who are proficient in ranged DPS as well: the permapirate and the swashbuckler.

Permapirates and swashbucklers can look somewhat similar; they are both pirates, and both switch between melee and ranged combat. Actually, two other closely related pirate odd jobs, the DEX brawler and bullet bucc, are worth mentioning here. These DEX-focussed buccaneers are more than capable of using guns, but for our purposes here, we don’t care about the differences between permapirates, DEX brawlers, and bullet buccs. Our focus is very narrow: just raw ranged DPS. Only DEX bucc is really at a disadvantage in this case, because they can’t put AP into STR in order to equip higher-level guns.

A quirk of permapirates is that, like permarogues, they are proficient in both melee (Somersault Kick, Flash Fist) and ranged (Double Shot) combat; yet, the permarogue has the same primary stat for both modes of combat (LUK), while the permapirate is pulled between two primary stats, STR (for melee) and DEX (for ranged). Here, we will assume that the permapirate specialises in gun-using, and thus favours DEX over STR. Swashbucklers, on the other hand, have no choice; they are pure STR by definition, and so their ranged damage is largely built on their STR (and to a lesser extent, whatever DEX they may have). This comparison may be somewhat unfair to swashbucklers, if only because third job doesn’t improve their raw ranged DPS all that much. Burst Fire is a bit underwhelming — it’s actually a downgrade at essentially any skill level below 11, and it maxes out at level 20 — but they do at least have their Octopus by their side to help them out a bit. We’ll take the Octopus into account here, but will separate it out into a no-Octopus swashbuckler and yes-Octopus swashbuckler, if only to see how much difference the lil guy makes.

With that said, let’s take a look at our models. As usual, they are all roughly level 100, and have pretty good gear:

As usual, we assume that all player characters and monsters have the same level. And as in the previous diary entry, we will use 600 WDEF to reasonably represent a low- or mid-level boss monster. The permapirate is using Double Shot, and the swashbuckler is using Burst Fire.

We also want to consider the swashbuckler’s use of Octopus, so we will calculate its DPS separately: 984.2.

IMPORTANT REMINDERS BEFORE ANYONE GOES AROUND TOUTING THESE NUMERIC FIGURES: Keep in mind (and I cannot stress this enough) that this is a purely one-dimensional — and somewhat shoddy — analysis using dummy models, and that jobs cannot be reduced to raw ranged DPS numbers. The odd jobs that are listed above differ wildly in their playstyles and range of abilities. Furthermore, this only considers characters that are roughly level 100.

My DEX spearwoman, rusa, did some dozen or so EPQs with ally (member of the Suboptimal alliance) and permabeginner Dizz. We were both in search of the Glittering Altaire Earrings, and because Dizz had already done quite a number of EPQs, he was just able to get his pair by the time we finished! Congrats! That’s a total of 50 EPQs… whew.

Playing a DEX warrior and having ungodly quantities of WACC (second only to DEX brawlers, who gain a whopping 0.9 WACC, instead of 0.8 WACC, per point of DEX) is pretty fun. You can fight all kinds of silly stuff when you’re well under the appropriate level, and so I’ve been recording rusa soloing the PQ bosses that she’s fought so far. Here she is, soloing the Big Bad Rock Guy (BBRG/BBRM): 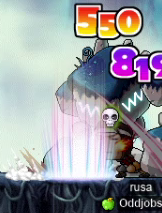 rusa gets her Ellin Savior’s Ring

Once everyone was done EPQing, I decided that it was a good time for rusa to get her Ellin Savior’s Ring. In honesty, this was the first time that I actually did the questline at an appropriate level (I usually procrastinate until roughly level 70), but rusa made quick work of it: 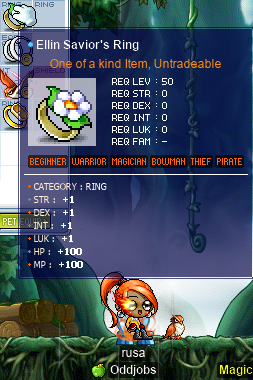 rusa now has a bit over 5.1k(!) MAXHP with HB, making her my first-ever character that I’ll be using Honsters on! :O

Dizz decided to join Oddjobs with another odd-jobbed character of his own: Brains, the DEXdit. I’ve actually just added DEXdit (a.k.a. LUKless dit, unfortundit) to the list of odd jobs on the Oddjobs website, and one of their defining features (and one of the things that Brains is excited about) is their extremely stable damage. Being LUKless makes their minimum and maximum damages roughly equal, and with a skill like Savage Blow that has so many damage lines (6 at max level), they tend to deal just about the same damage on every attack. DEX is, for obvious reasons, the main stat of DEXdits (hence the name “DEXdit”), but they are really only constrained to be LUKless, so some STR may be added as well, in order to equip daggers like e.g. the Dragon Kanzir and some shields like e.g. the Dragon Khanjar. DEXdits who are truly pure DEX (4 base STR, in addition to 4 base LUK) are considered “pure DEXdits”, which is its own subspecies, if you will.

When Brains hit level 21, I asked if he wanted to KPQ, to which he said yes. I could have KPQed on my besinner, hashishi, but I didn’t want to outlevel her DEXginner friend Gambolpuddy-chan, so I took my ordinary F/P mage MPQ-mule-to-be, potpan, instead:

Brains was wearing some equipment borrowed from his permabeginner Dizz, including a WATK Stolen Fence, which nearly fooled our party members into thinking he was an ordinary bandit:

And potpan hit level 31 in the first stage of one of our KPQs! Here she is, Fire Arrowing a Ligator to death: