In the diary entry before this one, we took a look at wood(wo)men and compared bow-users (rangers, because the focus is on third job) to crossbow-users (snipers) when it comes to ranged DPS — although wood(wo)men are, of course, also adept at melee, like their STR mage and permabeginner cousins. And in a much older diary entry (pt. iv), we even took a look at how STRmits stack up in terms of ranged DPS. In this entry, I want to take a look at (and compare) two seemingly unrelated odd jobs who are proficient in ranged DPS as well: the permarogue and the permarcher. Permarchers are actually not mutually exclusive with wood(wo)men, because any pure-STR permarcher is simultaneously a permarcher and a wood(wo)man; and likewise, permarogues are not mutually exclusive with STRlords, either, because a LUKless permarogue is simultaneously a permarogue and a STRlord. But here, we only consider “standard” (if an odd job can be called such a thing), non-hybridised, versions of these odd jobs.

The permanent-first-job nature of permarogue and permarcher has some interesting tradeoffs for each one. In particular, while they both suffer from a lack of booster, permarogues suffer somewhat less, because they can sometimes use speed 3 weapons, like the maple claws; these weapons would only have their speed category lowered by 1 due to booster (because the lowest possible speed category is 2), as opposed to the usual lowering by 2. On the other hand, there aren’t any bows nor crossbows that have as low of a speed category as 3 (nor even as low as 4). But in our models, the permarogue is using a Red Craven, which is speed 4 anyways. The more distinct advantage for the permarogue is that, while obviously neither of these jobs have mastery, that doesn’t make much of a difference for the permarogue (because L7 ignores claw mastery, and effectively always has 55.555…% mastery), while the permarcher suffers from the lack of extra damage and lack of damage stability. However, the permarcher has its own distinct advantage: permarchers have crits, while permarogues do not!

One caveat that should be noted here is that permarogues and permarchers are exceedingly fragile. They fare a tad bit better than permabeginners, but because they never take second job advancement, they are already-squishy classes who retain even more of their squishiness than usual.

With that said, let’s take a look at our models. As usual, they are all roughly level 100, and have pretty good gear:

As usual, we assume that all player characters and monsters have the same level. And as in the previous diary entry, we will use 600 WDEF to reasonably represent a low- or mid-level boss monster. The permarogue is using L7, and the permarcher is using Double Shot:

Just to give an idea of how permarogue vs. permarcher goes down with much lower WDEF, the DPS for permarogues and permarchers is 9033.0 and 6979.5, respectively, given 0 WDEF. This does narrow the gap somewhat — permarogues being a factor of 1.2942 better in this case, instead of a factor of 1.3641 — but permarogues still look significantly better here.

IMPORTANT REMINDERS BEFORE ANYONE GOES AROUND TOUTING THESE NUMERIC FIGURES: Keep in mind (and I cannot stress this enough) that this is a purely one-dimensional — and somewhat shoddy — analysis using dummy models, and that jobs cannot be reduced to raw ranged DPS numbers. The odd jobs that are listed above differ wildly in their playstyles and range of abilities. Furthermore, this only considers characters that are roughly level 100.

Failing another Toy of 101

You might remember the Toys of 101 that I boomed in pt. xx of this diary. I mustered up enough Power Crystal Ores to pay SiriusPlaque for another Toy; this time, with 96 WATK, 2 STR, 2 DEX, and 6(!) slots.

capre does a lil more card-huntin’

I didn’t have much time to card-hunt this time around, but every bit of card-hunting that my woodwoman capreolina does goes that much further towards her being… not squishy as hell. The goal (which capre is very close to now) is to complete the “good” chunk of Victoria Island, which is most of it, excluding the Excavation Site region of Perion and the deeper regions of Sleepywood (although I did do Cold Eyes because I was already 3/5 or 4/5). This is in line with Nimbus’s “Card Hunting Guide: Get your Tier 10 Ring ASAP”, which ranks Victoria Island very highly, excepting the above-mentioned regions. From there, I will probably move to Orbis Tower — which is listed as the first “S-tier” region — at least until I can get the T2 ring.

Once capre gets her T2 ring, I’m not entirely sure where to go from there. I may continue with her, since she needs rings the most desperately, or may switch back to card-hunting on my STR priest cervid to catch her up. Or, for that matter, it may make sense for me to get at least T1 on other characters, like my I/L magelet cervine (who could really use that INT), my swashbuckler hydropotina (quite squishy, similarly to capre), …

Ally (i.e. member of the Suboptimal alliance) and permabeginner Dizz was looking to EPQ, and both me and Noam had characters in level range: my DEX spearwoman rusa, and Noam’s besinner, Slimusaurus. It’s possible to EPQ as a party of 3, so off we went!! Here we are, fighting the big bad rock man (BBRM): 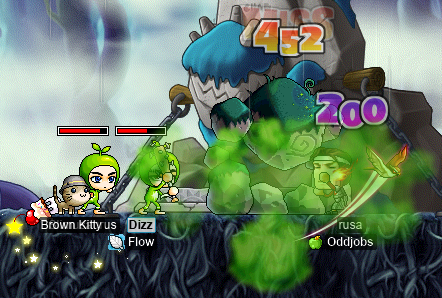 We did two EPQs, and in the last one, Dizz and Slimusaurus had an unfortunate encounter with death (thankfully, they still got the EXP), so I had to arduously solo BBRM~! Whew.

My baby besinner, hashishi, has been in need of just a smol LUK robe so that she can, uhm, flex on everyone in KPQ(?)

The story here started out similarly to the saga of rusa’s sad STR robe, with me booming a number of robes (with the power of just a single 70%, you can boom anything!) to start with. But I didn’t sink in quite as much money (thank god), and once I finally didn’t boom a robe, the result was much more impressive!: 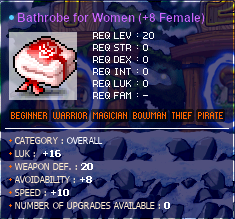 Looks like hashishi is going to be out-damaging the “real” sins in KPQ — at least, the ones with a sufficient quantity of INT…

Now that I failed another Toy of 101, I guess it is time… to farm moar Power Crystal Ores:

I actually decided to try farming at Kid Mannequins because GM buffs were announced, and there weren’t any HHs in my favourite spot. Kid Mannequins give quite good EXP (technically I can get a bit more by going to Male Mannequins, but I’m not usually that much of a potion-hogging masochist), in addition to dropping said ores. In fact, I was already really close to hitting level 101 on capreolina, so after a while of Kid Mannequin grinding, I leveled up!! capre is now level 101~! No more PPQ available to capre… what a terrible loss (</sarcasm>). Oh, and now I can finally see eye to eye with that headless guy. Heh. 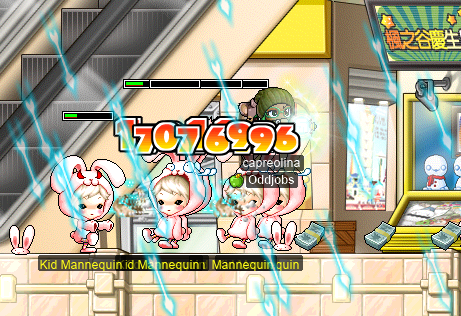 And I did switch over to my I/L magelet cervine to try out the same thing, but with Ice Strike:

Noam (OmokTeacher, Slime, Slimu) has been crafting Crimson Arcglaives, trying to get a really solid one to finally best his legendary Blood Snowboard (which is perfect, as it started with the maximum WATK, 83, and then had seven 30%s succeed on it). For those unaware, the Crimson Arcglaive is extremely difficult to obtain, as it can only be crafted, and the crafting ingredients are hard to come by, to put it lightly. However, Noam managed to craft and scroll a really nice one!!: 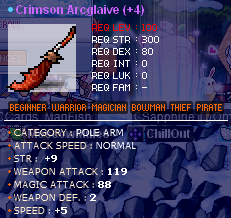 …Although it is, unfortunately, still definitively worse than his Blood Snowboard, at least for someone who can’t make use of the MATK, like a permabeginner. However, he offered to let me borrow it until he got to level 100 (as the Arcglaive is a level 100 weapon)! <3

Here I am with Noam (OmokTeacher) and Kelsey (Taima; also Tacgnol, Boymoder, Yotsubachan), as we grind at Fancy Amps together, with me wielding Noam’s Arcglaive ^^: 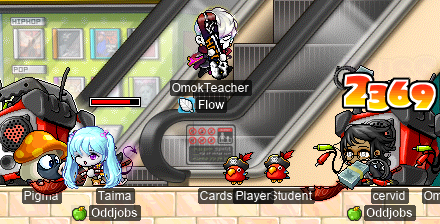 This Arcglaive is such a nice weapon! It does incredible damage, while also giving the nice +5 SPEED, and importantly, the MATK that makes my Heals so much more effective! No need to pop CZPs/Wizard Elixirs alongside my usual Ciders when I have this bad boy equipped. 88 MATK blows those things out of the water, and I can easily heal myself to full HP in a single Heal, regardless of my current HP!

We ground at Fancy Amps until Taima and OmokTeacher ran out of Barb Elixirs; I ended up getting some 19.5ish percent EXP from that grinding session! Very solid stuff :O