More MPQ with ETAN and Keki

I got to do a few more MPQs, with my STRlord friend and guildmate Boymoder (a.k.a. Taima, Tacgnol), crusader ETAN, and I/L mage Keki! 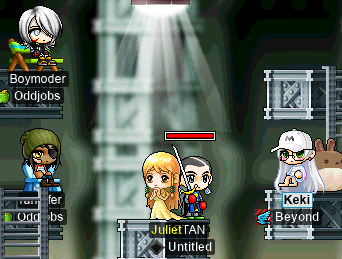 These MPQs generally went pretty smoothly, particularly thanks to Keki’s ridiculously high damage… Here we are, fighting Angy Fanky, whilst I elbow the diaper robots:

Somewhere during this fight, ETAN found his way to the grave…

(And yes, you still get the the bursts of EXP at the end, even if you die, as long as you don’t click the revive button.)

I did some more training at Fancy Amps with Taima, as a permabeginner/STR priest duo, with my STR priest cervid. We were both hungry for that sweet, sweet EXP. And Taima even reported recoding some 1.8M EPH or so, 100k more than we recorded last time!! 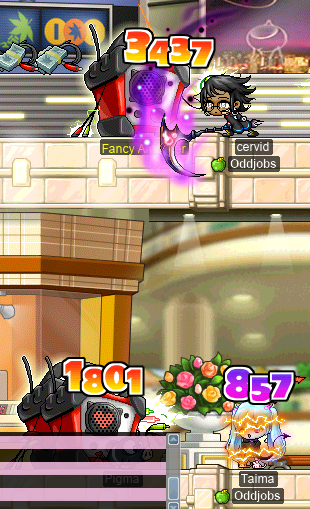 A lesser-known variant of ye olde permabeginner (which is typically STR-based, with the exception of DEXginners) is the besinner. Besinners (also known as “LUK beginners” or “LUKginners”) are LUK-based, because they only use claws. Most claws, obviously, are restricted to rogues only. But some, like the Magical Mitten, can be used by any job.

Last MapleLegends anniversary event, the Sweet Fork Cake was made available, so in case I ever wanted to play a besinner myself, I went ahead and made one, and got the fork. Her name is hashishi, from the Arabic hashīshī, literally “one who uses hashish”, but figuratively used to mean “low-life, outcast, rabble”; this term is commonly believed to be the origin of the English assassin, meaning “a member of the Order of Assassins”, and later meaning, more generally, “one who commits murder, especially of a politically important person”. The plural of hashīshī is hashīshīn, and the pluralising -īn was mistaken for being part of the root word when the word was imported into European languages (hence in English, singular assassin, plural assassins). This etymology is probably ultimately false, though, put forth mistakenly by Marco Polo; Hassan-i Sabbah (not to be confused with the band of the same name) referred to his followers as Asāsiyyūn, meaning “people who are faithful to the foundation [of the faith]”.

Like this false etymology, hashishi is a false assassin. In fact, she hasn’t a single rogue/assassin/hermit/nightlord skill to her name, unless you count “noob haste”. A funny quirk of besinners is that they can be truly DEXless (indeed, truly pure LUK), unlike actual assassins, who need at least 25 base DEX, and may want more in order to wear equipment. Here’s a look at my level 17 baby besinner’s stats (with Cider active): 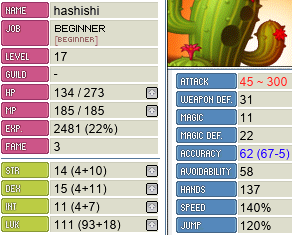 And here I am with Boymoder, a real assassin (and a STR-based one, at that), testing out some star-throwin’: 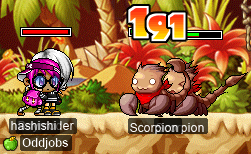 Perhaps the biggest bummer for besinners, however, is that they don’t get access to Keen Eyes. So while they are kinda ranged, they play more like longer-range melee… Definitely not enough to serve as range in LPQ. And their damage is low in comparison to STR-based beginners. But they have all the swag points, and all the WACC & AVOID!

And I’m continuing to card-hunt on cervid. I decided to get some more cards from Perion, so here I am, huntin’ it up:

Oh, and I just realised that for low-level mobs, I can just use Shining Ray (which I put a single meme SP into), with my I/L magelet’s (cervine’s) gear equipped: