I did some more card-hunting on my STR priest, cervid, as my goal is to at least get a tier 1 ring for her! I was still working on that first page, so it was all Victoria Island maps for me: 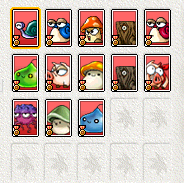 While I was in Victoria Island, I decided to try out my dragonito again, but this time on some much lower-level monsters. Here I am, with a Wizard Elixir active and my Crimson Arcglaive in hand, watching my lil dragonito absolutely slay some Snails: 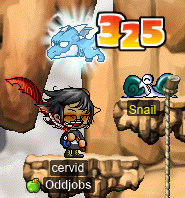 Training at Voodoos with Taima!

My level 103 permabeginner friend and guildmate Taima was training at Voodoos, to get some EXP, and equally importantly, some Heartstoppers for permabeginner/odd-jobbed boss runs~ I decided to join her, and by our powers combined, we were able to squeeze out some 850k EPH or so! Not as good as the roughly 1.7M from grinding at Fancy Amps, but pretty respectable for such an easy place to train, that also gives those sweet Heartstoppers. Training at Voodoos is particularly easy for permabeginners like Taima, because of the way that WDEF’s effectiveness varies based on the combination of your class and level. Beginners can get hit for 1 damage every time by Voodoos with only a relatively modest WDEF. As a STR priest, on the other hand, I was getting hit for roughly 60~70 damage per hit, even with all of my gear equipped, max Magic Armour, and max Invincible! 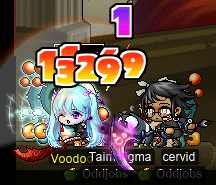 Boymoder (a.k.a. Taima, Tacgnol) and I were able to, eventually, pull together a functional MPQ party. It was the two of us, plus Whitebeard1 (who I was already familiar with, having OPQed and MPQed with him before), and IHealForYou, who is a friend of mine from OPQ. IHealForYou was new to MPQ, so Boymoder and I showed him the ways~

Whitebeard1 is — like me — a marauder, but does… a lot more damage than I do, thanks to being an ordinary marauder, rather than a pugilist like myself. So when we finally got to the final stage (boss fight), I decided that even with a relatively small amount of time on the clock (only 15 minutes or so, because we were a bit slow in the earlier stages, as Whitebeard1 and IHealForYou were still learning), we should fight Angy Fanky for the big EXPs, and “true ending” of the PQ.

Unfortunately, Whitebeard1 (and IHealForYou) were having some internet issues, and our main DPS, Whitebeard1, died almost immediately after the boss fight started:

Because IHealForYou was having internet issues as well, he died later on in the boss fight. Boymoder and I tried our damnedest to kill Angy Fanky before time ran out (we gave up on protecting Romeo about halfway through), but once we had run out of time, Angy Fanky was unfotunately still at 2% HP or so. :/

We did another MPQ, which fortunately was much faster and cleaner — although this time, of course, we went with Non-Angy Fanky. Not the true ending, but still, we at least fully completed the PQ and each got our random end-reward items and marbles.

And here I am in the same place, but naked — at least, naked NX-wise:

I look like I do a lot of damage. But, looks can be deceiving…

And here I am, joined by 44ayuh and Lovecraft, as we wait for a mage (MPQ requires at least 1 mage): 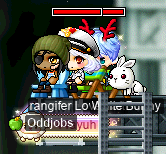 Eventually, 44ayuh, Lovecraft, and I gave up, and decided that it was PPQ time: 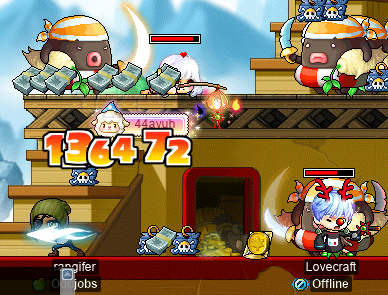 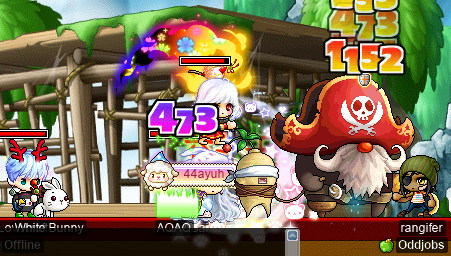 I’m not a big fan of PPQ myself, and the EXP is more geared towards characters in the 55~70 level range (somewhat similar to OPQ), but it was nice to try it out on my pugilist~