Now that I graduated OPQ, it was time to get rangifer her very own Ellin Savior’s Ring! Most people probably like to get theirs around the time that they graduate LPQ, but I generally don’t feel the need for it until I’m MPQing, and it’s a little easier to get once you’re higher level than the Lazy Buffies. rangifer hunted for all of the ETC items herself, with the exception of Firewoods, which I already had, and which aren’t very interesting to farm anyways:

Just about 85% of the way through getting my ring, a sader by the name of ETAN (who I already knew from OPQing on another character) was trying to recruit for MPQ! Thanks to I/L mage jellyicez (a.k.a. jellystarz, jellyslashz), we were able to form a full party (exactly 4 characters, with at least 1 being a mage)!! So I rocked to Magatia to MPQ with the crew, including a previously mentioned OPQ friend of mine, Kimbow! But now, Kimbow was shooting 5 lines!! :O

Unfortunately, in our first MPQ, ETAN’s game crashed, so Kimbow and I had to fight not-so-angy fanky as a duo (with jellyicez on Romeo-protecting duty). But our runs otherwise went smoothly!

Kimbow remarked that the combination-searching in stage 6 might just give her brain damage, and I can’t say I blame her, especially with the global chatlog spam making it twice as difficult as it really is…

As that party dissolved and we were looking for new members, I decided to transfer my equipment to my woodwoman, capreolina, in the meantime, so I could try hunting for Soiled Rags for the Silver Deputy Star quest. I actually already had 2 rags, so I just needed the 28 other ones… 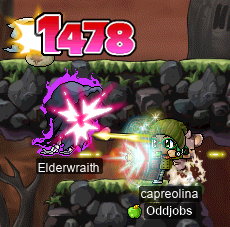 The drop rate is really abyssmal, Elderwraiths spawn rather infrequently, and the damn things:

On the other hand, their MDEF is comparatively low (550), and they are weak to holy-typed spells. You know, like Genesis. So I was likely getting at least an order of magnitude fewer rags per hour than someone who has level ≥1 Genesis. Realising this, I just… gave up, heh. I bought 25 rags in the FM and just got on with it.

Adding some new odd jobs to the list; first revision of my swashbuckler guide

I’ve added a few new odd jobs to the list on the Oddjobs website. One is similar to the grim reaper: the carpenter (a.k.a. jigsaw killer, woodworker). The only restriction on carpenters is that they can only use the Saw, a one-handed sword that is only equippable by thieves/rogues. Like the grim reaper, this odd job is unfortunately unplayable in MapleLegends, because the Saw does not exist in-game (even if it is represented in the library).

And two are similar to the pistol-whipper (a.k.a. buffalo, bulletless sair):

On that note, I’ve published the first revision of my swashbuckler guide, on the Oddjobs website. If you’re expecting it to be on the MapleLegends forums, I will post it there as well, but not until I consider it to be more “mature”, and also not until I have a lil video to accompany it ^^.

I actually got in a few more MPQs (rangifer is now level 72 & 78%), with a new crew. Kimbow was still with me, but also joining us was F/P mage Fabienne, and fellow marauder (with whom I also OPQed), Whitebeard1. Here I am, posing with Whitebeard1:

And here we are, doing stage 3 of MPQ:

I found that rangifer’s performance is a bit… subpar in MPQ (at least, compared to how I did during the early levels of OPQ), although that may improve once I get to level 80+ or so. A big issue is that the MPQ monsters tend to have rather significant WDEF; for example, Neo Huroids in stage 4 — which you generally have to kill quite a few of in order to clear stage 4 — have 400 WDEF. If I’m at least the level of the Neo Huroids (I’m not yet, since they are level 79, so leveling up should improve things at least), that 400 WDEF shaves an average of 220 damage off of each line of damage. Except, actually, that’s not exactly how it works. this average of 220 damage is shaved off not from the final damage number, but from the raw damage (before skill multipliers). So even if I use a skill with a high damage multiplier, like e.g. Flash Fist (270% damage), that 270% is applied only after WDEF is applied. So by that point, it’s multiplying a pretty pathetic number. For reference, at level 72, fully geared (with some pretty good gear) and with a Cider active, my before-WDEF range is 159~1137. So 400 WDEF is significant enough to make me hit quite a few “1”s. :/

On the bright side, Transformation actually grants the equivalent of Haste for its duration (+40 SPEED, +20 JUMP), so here I am using it to do the left-hand-side JQ (jump quest) in stage 4 of MPQ:

I went and finished up the quests for the Silver Deputy Star and the Ellin Savior’s Ring, respectively, and now rangifer is that much stronger!!: