As usual for this event, the first thing I did today was farm up 100 wrapping papers 🎁📃 on my I/L 🧊🌩️ magelet cervine… Then it was time to LPQ 🛑🐀🐙👀🐋!!!! I was lucky enough to LPQ with ally and permabeginner 🔰 drainer (mae, also known in-game as the priest 🛐 technopagan and the gish 🗡️✨ raving)~ I met mae when I was OPQing with my swashbuckler ⚔️🔫🏴‍☠️, hydropotina, so it was very nice to be reunited with her and PQing again (but this time, LPQ style)!! 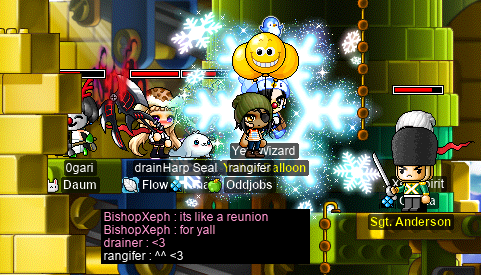 We were looking for a ranged 🏹 character at one point, and all we found was another brawler 👊. But, I knew (from experience playing my swashbuckler) that guns 🔫 were prefectly capable of acting as the range 🏹 required for LPQ. The brawler in question had their starter gun 🔫 with them still, and they were able to pick up some bullets from the local shop 🏪. I was convinced that this would do the trick, since I never had any issues on my swashbuckler (despite being pure STR 💪🏾💪🏾💪🏾), and there is no pirate 🏴‍☠️ equivalent of Keen Eyes 👁️🔍. However, when we got to stage 7, they were actually completely incapable of hitting the rats 🐀!! They had gone for Dash 🏃 instead of Double Shot, so my only explanation, as far as I could tell, was that Double Shot has longer range than basic-attacking with a gun.

After a few LPQs, though, LPQ got kinda dead as everyone left 👋🏾. And mae had been staying up pretty late 🥱, so she decided that it was time to go and sleep 😴. After a while, I ended up getting picked up by another group who auctioned me off for a mere 35 mesos ;(

Luckily, even if some people (looking at you, locki…) seemed to not deem me worth 35 mesos 😭, sooyaaa95 had my back…

After a few more LPQs, rangifer was some 18% of the way through level 48, and I decided to take a break to farm wrapping papers 🎁📃… but this time, on my woodman 💪🏾🌲🏹, capreolina! I’ve actually just filmed a roughly 2-minute demo video of me playing my woodman, which you can watch on the Oddjobs 🍏 YouTube channel 📺!! Once I finished up gathering my 200th wrapping paper that session 😵, I proceeded to get even more worthless garbage 🗑️ from Santa's Helper! Wow, cool 😅!

At this point, I hopped on my STR priest 💪🏾🛐, cervid, because my friend Justin (known in-game as Justinorino, or, in this case, as Sopooroh) needed some help at CDs 💿💿; I would be there to furiously Heal ❤️‍🩹 (with most of my magelet’s gear on, and a Wizard Elixir 🧙🏾‍♀️⚗️ active, I’m able to achieve a TMA of a whopping 249 with just 20 base INT!) as he rawr’d 📢 the CDs to death 💿☠️. This went quite well — especially after we figured out that it was best for him to cast Hyper Body for my benefit, then cancel it out on himself so that he lost a smaller absolute quantity of HP per rawr. That way my STR-mage-trying-really-hard Heals would not be so ineffective, as they somewhat were with his nearly 30k HP when Hyper Body was active 😅.

Then, once Justin was done training, I went back to researching gear upgrades 👚📈. I’ve spent a lot of cash 💰💰💰 (which I do not regret; the fact is that INT/MATK gear has, unfortunately, extremely inflated prices due to the existence of washing & leeching 😖) outfitting my magelet, and it’s time that I do something similar with the rest of my characters. Fortunately, I’ve chosen the rest of my character’s jobs such that they are all essentially pure STR 💪🏾💪🏾💪🏾… they all crave WATK, DEX, WACC, and — to some extent — STR, on their gear. For this reason, I do a lot of gear sharing ♻️, and at the moment, the mainstays of this shared gear are (not counting temporary items, of course):

And I’m really looking to squeeze out some more WATK, and more DEX/WACC. It’s going to take a lot of owls 🦉🦉🦉, but hopefully I will be doing some really nice damage!! ⚔️💥