When rangifer first logged on today, Boymoder was already LPQing 🛑🐀🐙👀🐋! Her party was full, so I was grinding out wrapping papers 🎁📃 on my I/L 🧊🌩️ magelet, cervine, while I waited. Then our ally (and otherwise guildmate) Mings, the level 35 beginner, logged on and expressed interest in LPQing as well. Then, our F/P 🔥🧪 gishlet guildmate TestChars (otherwise known as Outside or braidgame) also expressed interest! Unfortunately, Mings had to leave before we could get the party going, but the other three of us were able to cobble together a nifty LPQ party ✨!

With our original LPQ party, we had a somewhat challenging (although still reasonably swift) fight with Alishar 🐋 at the end… and we did very well! I’m still getting the hang of controlling my character now that I have so many attacking skills 😫 (as brawlers/marauders/buccaneers do), and I just hope that no one notices how much I’m stuggling to press the keyboard in the right ways 😆! That being said, playing a brawler is heaps of fun, and who needs weapons when you’ve got ten thousand ways to beat your enemies up 👊🏾🦵🏾👊🏾🦵🏾…? Here we are posing for the camera 📸: 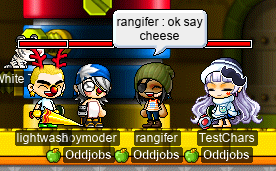 In other news, Boymoder has gotten herself a very nice Shinobi Bracer for when she hits level 55~! Unfortunately, this is only after having extremely poor luck scrolling a Maple 🍁 Skanda 😬… failing six out of the seven 60% scrolls on a weapon that is already very pricey to begin with is absolutely brutal ☹️… this new Shinobi Bracer replaces the Skanda, being better than the Skanda in every way 🎉.

Since I went over some of the math 🧮 behind second job STRlords in part ii of this diary, I’ll take the time here to go over some similar aspects, but of third job rather than second. STRlords get two new notable attacking skills in third job: Shadow Meso 🌑💸 and Avenger ✴️. They are also aided by getting access to Shadow Partner 👥 as well! Let’s consider what the DPS of these skills looks like for STRlords, assuming that they are maxed.

Our model monster is the same level as the player character, and has 400 WDEF. Shadow Meso says in its description: “Nullifies the monsters’ ‘weapon def. up’ and ‘magic guard up.’”; Hidden Street’s version instead says “Ignores the enemies’ ‘weapon def. up’ and ‘magic guard up.’” (the discrepancy may just be a difference in GMS version). While this is a bit of an odd thing for this skill to be doing (it would seem to be stepping on the toes of Armor Crash and Magic Crash…), there’s no reason to really suspect that Shadow Meso ignores WDEF entirely, so we will assume that it interacts normally with WDEF. Shadow Meso isn’t a very popular skill, but if anyone wants to actually do some damage tests, that would be awesome.

Here, “minDmgPreWdef” is the minimum damage dealt before WDEF is taken into account, likewise for “maxDmgPreWdef”, and “max” stands for “maximum [value of a set]”. Because we already made the assumption that the monster and the player character are the same level, (1 - 0.01 * max{monsterLevel - playerLevel, 0}) is just 1, so this simplifies to:

Again, we take the damage — given that the damage is either a critical, or given that it is not a critical — to be uniformly distributed, so we can easily get the expected damage of a given hit (again, knowing whether or not it’s a critical hit) by taking the arithmetic mean of the minimum and maximum. For a non-crit, this is (3160 + 7800) ÷ 2 = 5480 damage. For a crit, this is (4740 + 11700) ÷ 2 = 8220 damage. We know from Shadow Meso’s skill description that at max level, it has a 10% = 0.1 probability of critting, and thus a 1 − 0.1 = 0.9 probability of not critting. Because expectation is linear, we can get the expected damage of a given Shadow Meso — but this time, without knowing whether it will be a crit or not — by simply calculating the weighted sum of the two expectations:

14192.5 DPS in a realistic scenario is nothing to sneeze at 😮! Ordinary (LUK-based) hermits/nightlords tend to neglect Shadow Meso entirely, since its damage only really scales with skill level, and does not scale at all with any of the character’s stats (WATK, LUK, DEX, STR, etc.). However, in the hands of a STRlord, who only uses claws in one of their two modes of combat (their other being melee ⚔️), Shadow Meso can be an extremely potent addition to their arsenal that puts their single-target DPS above that of almost any other odd job 🤯!

Doing similar calculations for Avenger is somewhat simplified by the fact that Avenger ignores WDEF whenever the player character’s level is greater than or equal to the level of their target. Because we already assumed that these two levels are the same, we can totally ignore WDEF for the purpose of Avenger damage calculations (phewf! 😌). Avenger is a much more ordinary skill in comparison to Shadow Meso, so it uses the usual physical damage formulae:

Of course, now that we’re dealing with actual stats (LUK, STR, DEX, WATK), we have to decide what level this hypothetical STRlord is and what their gear is like. Here’s the model I chose (based on a roughly level 102 hermit, because that’s roughly the minimum level to have Shadow Partner, Shadow Meso, and Avenger maxed):

So how does a third-job pugilist compare?? Well, that may be for a future diary entry…