I’ve never tried doing a MapleStory diary, but since I’ve just started a new character, I figured I’d give it a go ^^. This will be a diary for rangifer, the pugilist! The first entry is very short (barely its own entry), so both the first and second entries will be condensed into this post.

The character is created… and her name shall be rangifer 🦌.

rangifer is shaping up nicely~! Been leveling up with fellow Oddjobs member Boymoder (Kelsey) the STRlord, who is also in the guild with her F/P gishlet Tacgnol, and her permabeginner Taima!

Once we hit level 21, we headed off to Kerning City!… to do Shumi’s Lost Coin 🔎🪙. Let’s just say that Kelsey is a little more experienced with JQs than I am 😅…

Once that quest was done, it was the greatest time of all: KPQ time! We did quite a number of KPQs, with some very nice people, in some large (5–6 person) parties 🥳. Boymoder has been finding her claw to actually be quite useful, so we almost had people fooled that we were just a normal brawler-to-be and assassin-to-be, at least until Boymoder pulled out the ol’ Gold Surfboard 🏄. As an aside, readers unfamiliar with STRlords should know that using a claw during first job means basic attacking, not using Lucky Seven, because Lucky Seven has its own special-sauce damage formula that is very, very bad for STRlords 😕!

At some point, most people decided it was time to take a break, so Boymoder and I took a break too, and chatted with a level 82 white knight ♘ in Kerning City who seemed mildly surprised that seasoned MapleLegends players would go and make some crappy odd-jobbed characters 😛. Also, Boymoder took this opportunity to scroll a sweet 59 WATK Monkey Wrench 🔧, which is her main melee weapon for now! The Monkey Wrench is a classic weapon for woodmen, brigands, and of course STRlords, due to it being equippable not just by warriors, but also by archers and by rogues~

Then our friend NoobIet (Noobiet), the dagger warrior 🗡️🛡️, logged on! And he was level 21, so it was time to KPQ!! Thus commenced the first-ever all-Oddjobs PQ 🍏: 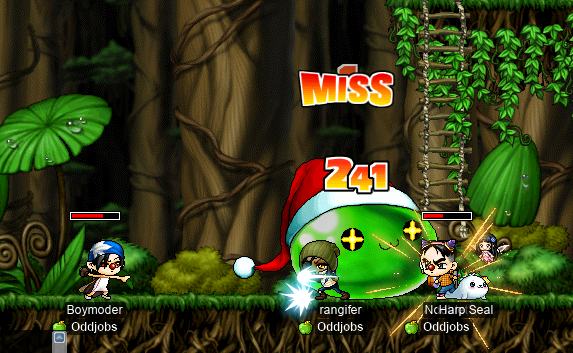 Pictured: The Oddjobs guild takes down King Slime. Look at those big numbers!!

You can actually watch the full PQ on the Oddjobs YouTube channel 📽️!

We did a few PQs together as an odd-jobbed trio, and then it was ta-ta for now! rangifer made it from level 2 to level 27 in a single session, wowie!! I aspire to some day make it to third job so I can transform, and do that cool ground pounding thing! We’ll see~~ ✨