This work is based on the work by Jeff Geerling. I made some modifications to the original project to fit my personal setup.

I have had a couple Pis doing random Internet-related duties for years. It's finally time to formalize their configs and make all the DNS/ad-blocking/monitoring stuff encapsulated into one Ansible project.

So that's what this is.

Internet Monitoring: Installs Prometheus and Grafana, along with a few Docker containers to monitor your Internet connection with Speedtest.net speedtests and HTTP tests so you can see uptime, ping stats, and speedtest results over time. 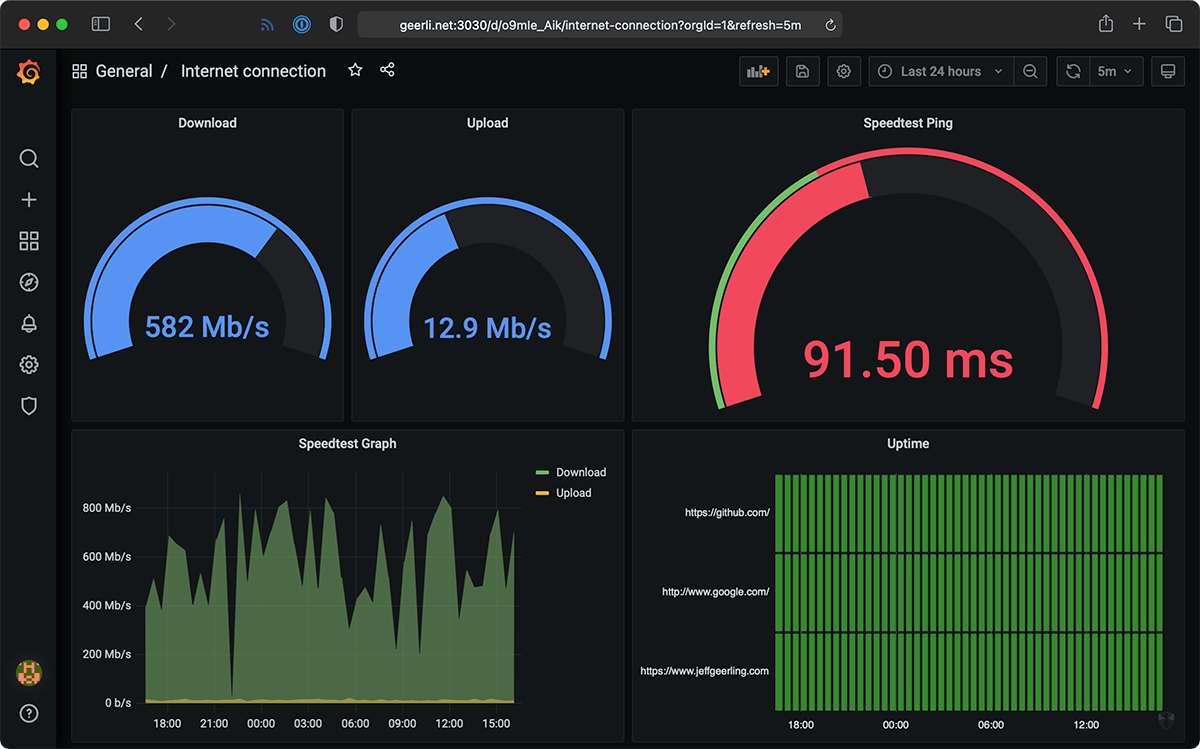 Pi-hole: Installs the Pi-hole Docker configuration so you can use Pi-hole for network-wide ad-blocking and local DNS. Make sure to update your network router config to direct all DNS queries through your Raspberry Pi if you want to use Pi-hole effectively! 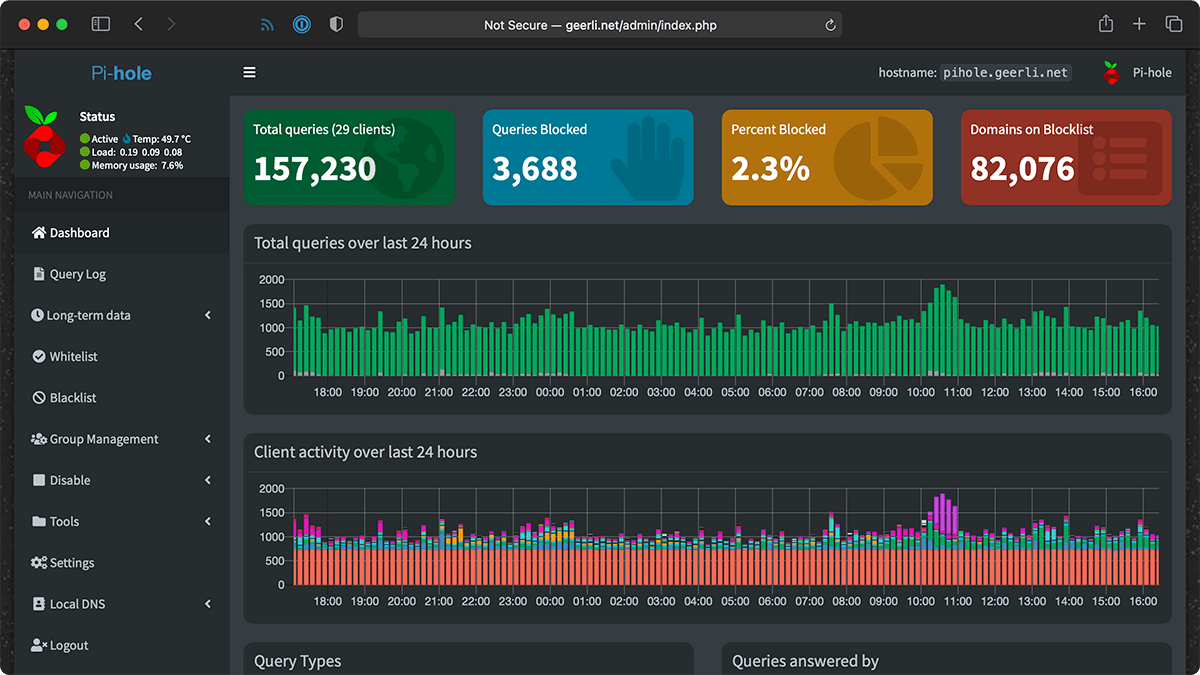 IMPORTANT NOTE: If you use the included Internet monitoring, it will download a decently-large amount of data through your Internet connection on a daily basis. Don't use it, or tune the internet-monitoring setup to not run the speedtests as often, if you have a metered connection!

You should use a Raspberry Pi 4 model B or better. The Pi 4 and later generations of Pi include a full gigabit network interface and enough I/O to reliably measure fast Internet connections.

Older Pis work, but have many limitations, like a slower CPU and sometimes very-slow NICs that limit the speed test capability to 100 Mbps or 300 Mbps on the Pi 3 model B+.

Other computers and VMs may run this configuration as well, but it is only regularly tested on a Raspberry Pi.

The configuration is tested against Raspberry Pi OS, both 64-bit and 32-bit, and runs great on that or a generic Debian installation.

It should also work with Ubuntu for Pi, or Arch Linux, but has not been tested on other operating systems.

If running locally on the Pi: You may encounter an error like "Error while fetching server API version". If you do, please either reboot or log out and log back in, then run the playbook again.

To find the dashboard, navigate to Dashboards, click Browse, then go to the Internet connection dashboard. If you star this dashboard, it will appear on the Grafana home page.

Note: The monitoring_grafana_admin_password is only used the first time Grafana starts up; if you need to change it later, do it via Grafana's admin UI.

A number of default Prometheus job configurations are included out of the box, but if you would like to add more to the prometheus.yml file, you can add a block of text that will be added to the end of the scrape_configs using the prometheus_extra_scrape_configs variable, for example:

You can also add more targets to monitor via the node exporter dashboard, say if you have a number of servers or other Pis you want to monitor on this instance. Just add them to the list, after the nodeexp:9100 entry for the main Pi:

To upgrade Pi-hole to the latest version, run the following commands:

Upgrades for the other configurations are similar (go into the directory, and run the same docker-compose commands. Make sure to cd into the config_dir that you use in your config.yml file.

Alternatively, you may update the initial config.yml in the the repo folder and re-run the main playbook: ansible-playbook main.yml. At some point in the future, a dedicated upgrade playbook may be added, but for now, upgrades may be performed manually as shown above.

A guide for backing up the configurations and historical data will be posted here as part of Issue #194: Create Backup guide.

To remove internet-pi from your system, run the following commands (assuming the default install location of ~, your home directory):

You can then delete the internet-monitoring, pi-hole, etc. folders and everything will be gone from your system.

This project was created in 2022 by Bart Mathijssen.