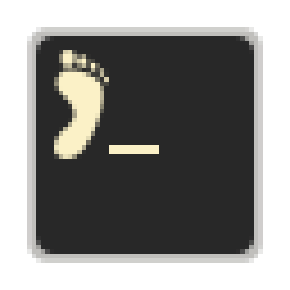 Why the name ‘foot’?

I’m bad at names. Most of my projects usually start out as foo something (for example, yambar was f00bar for a while).

As a side note, if you pronounce the foo part of foot the same way you pronounce foobar, then foot sounds a lot like the Swedish word fot, which incidentally means (you guessed it) foot.

foot supports all fonts that can be loaded by freetype, including bitmap fonts and color emoji fonts.

If a glyph cannot be found in any of the user configured fallback fonts, then fontconfig’s list is used.

These are the default shortcuts. See man 5 foot and the example footrc to see how these can be changed.

ctrl+r
Search backward for next match
ctrl+s
Search forward for next match
ctrl+w
Extend current selection (and thus the search criteria) to the end of the word, or the next word if currently at a word separating character.
ctrl+shift+w
Same as ctrl+w, except that the only word separating characters are whitespace characters.
escape, ctrl+g
Cancel the search
return
Finish the search and copy the current match to the primary selection

left - single-click
Drag to select; when released, the selected text is copied to the primary selection. This feature is disabled when client has enabled mouse tracking.
Holding shift enables selection in mouse tracking enabled clients.
Holding ctrl will create a block selection.
left - double-click
Selects the word (separated by spaces, period, comma, parenthesis etc) under the pointer. Hold ctrl to select everything under the pointer up to, and until, the next space characters.
left - triple-click
Selects the entire row
middle
Paste from primary selection
right
Extend current selection
wheel
Scroll up/down in history

When run normally, foot is a single-window application; if you want another window, start another foot process.

However, foot can also be run in a server mode. In this mode, one process hosts multiple windows. Note that this is nothing like tabs. When first started in server mode, no windows are available.

The point of this mode is a) reduced memory footprint - all terminal windows will share fonts and glyph cache, and b) reduced startup time - loading fonts and populating the glyph cache takes time, but in server mode it only happens once.

The downside is a performance penalty; all windows’ input and output are multiplexed in the same thread (but each window will have its own set of rendering threads). This means that if one window is very busy with, for example, producing output, then other windows will suffer.

And of course, should the server process crash, all windows will be gone.

Typical usage would be to start the server process (foot --server) when starting your Wayland compositor (i.e. logging in to your desktop), and then run footclient instead of foot whenever you want to launch a new terminal.

When disabled, foot will instead set the 8:th bit of meta character and then UTF-8 encode it. This corresponds to XTerm’s eightBitMeta option set to true.

Foot transmits DEL (^?) on backspace. This corresponds to XTerm’s backarrowKey option set to false, and to DECBKM being reset.

Note that foot does not implement DECBKM, and that the behavior described above cannot be changed.

Finally, pressing alt will prefix the transmitted byte with ESC.

Font sizes are apparently a complex thing. Many applications use a fixed DPI of 96. They may also multiply it with the monitor’s scale factor.

This results in fonts with different physical sizes (i.e. if measured by a ruler) when rendered on screens with different DPI values. Even if the configured font size is the same.

This is not how it is meant to be. Fonts are measured in point sizes for a reason; a given point size should have the same height on all mediums, be it printers or monitors, regardless of their DPI.

Foot will always use the monitor’s physical DPI value. Scale factors are irrelevant (well, they affect e.g. padding, but not the font size). This means the glyphs rendered by foot should always have the same physical height, regardless of monitor.

Tip: QT applications can be configured to work this way too, by exporting the environment variable QT_WAYLAND_FORCE_DPI=physical.

Note: if you configure pixelsize, rather than size, then DPI changes will not change the font size. Pixels are always pixels.

OSC, Operating System Command, are escape sequences that interacts with the terminal emulator itself. Foot implements the following OSCs:

In addition to the dev variant of the packages above, you need:

A note on compilers; in general, foot runs much faster when compiled with gcc instead of clang. A profile-guided gcc build can be more than twice as fast as a clang build.

Note GCC 10.1 has a performance regression that severely affects foot when doing PGO builds and building with -O2; it is about 30-40% slower compared to GCC 9.3.

The work around is simple: make sure you build with -O3. This is the default with meson --buildtype=release, but e.g. makepkg can override it (makepkg uses -O2 by default).

foot makes use of a couple of libraries I have developed: tllist and fcft. As such, they will most likely not have been installed already. You can either install them as system libraries, or you can build them as subprojects in foot.

When building foot, they will first be searched for as system libraries. If found, foot will link dynamically against them.

Or use makepkg to build the bundled PKGBUILD (run makepkg in the source root directory).

Unlike the AUR packages, the bundled PKGBUILD requires tllist and fcft to be installed as system libraries. If you do not want this, please edit the PKGBUILD file, or install manually (see Other below).

Note that it will do a profiling-guided build, and that this requires a running wayland session since it needs to run an intermediate build of foot.

Foot uses meson. If you are unfamiliar with it, the official tutorial might be a good starting point.

I also recommend taking a look at the bundled Arch PKGBUILD file, to see how it builds foot. Especially so if you intend to install a release build of foot, in which case you might be interested in the compiler flags used there.

If you have not installed tllist and fcft as system libraries, clone them into the subprojects directory:

To build, first, create a build directory, and switch to it:

For performance reasons, I strongly recommend doing a PGO (Profile Guided Optimization) build. This requires a running Wayland session since we will be executing an intermediate build of foot.

If you do not want this, just build:

and then skip to Running the new build.

For packagers: normally, you would configure compiler flags using -Dc_args. This however “overwrites” CFLAGS. makepkg from Arch, for example, uses CFLAGS to specify the default set of flags.

Thus, we do export CFLAGS+="..." to at least not throw away those flags.

When packaging, you may want to use the default CFLAGS only, but note this: foot is a performance critical application that relies on compiler optimizations to perform well.

First, make sure you have configured a release build directory, but:

If using Clang, make sure to add -Wno-ignored-optimization-argument -Wno-profile-instr-out-of-date to CFLAGS.

If using GCC, make sure to add -Wno-missing-profile to CFLAGS.

Then, tell meson we want to generate profile data, and build:

Next, we need to execute the intermediate build of foot, and run a payload inside it that will exercise the performance critical code paths. To do this, we will use the script scripts/generate-alt-random-writes.py:

You should see a foot window open up, with random colored text. The window should close after ~1-2s.

If using Clang, now do (this requires llvm to have been installed):

Next, tell meson to use the profile data we just generated, and rebuild:

You can now run it directly from the build directory:

But note that it will default to TERM=foot, and that this terminfo has not been installed yet. However, most things should work with the xterm-256color terminfo:

But, I recommend you install the foot and foot-direct terminfo files. You can either copy them manually (typically to /usr/share/terminfo/f - but this is dependens on the distro), or just install everything:

The report should contain the following:

Every now and then I post foot related updates on @dnkl@linuxrocks.online