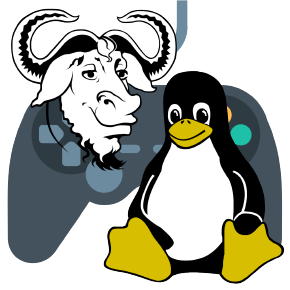 LinuxCafeFederation
/
awesome-gnu-linux-gaming
Fork 2
Code Issues 0 Pull Requests 0 Releases 0 Activity
A curated list of awesome GNU/Linux tips & tricks, games, tools, and resources
linuxopensourcegnu-linuxfree-softwarefreefree-culturegnugamingwinesteamvalveproton
You can not select more than 25 topics Topics must start with a letter or number, can include dashes ('-') and can be up to 35 characters long.
273 Commits
1 Branch
424 KiB
Markdown 100%
Branch: master
master
Branches Tags
${ item.name }
Create branch ${ searchTerm }
from 'master'
${ noResults }

A curated list of awesome GNU/Linux tips & tricks, games, tools, and resources. Inspired by awesome-vulkan and other awesome-related projects.

This is a hobby project to improve the quality of gaming in Linux because it is possible to improve performance by tweaking your Linux machine. Most Linux distributions have a lot of issues when it comes to gaming performance, as they do not utilise the modern and superior counterparts.

Based on Ubuntu. Attempt from System76 to "de-Canonical-ise" Ubuntu, as well as some minor tweaks for gaming.

Community maintained distribution to provide the upstream kernel in correlation with stable packages. Comes with performance tools pre-installed such as gamemode.

The purpose of Linux Mint is to produce a modern, elegant and comfortable operating system which is both powerful and easy to use.

Ubuntu is the modern, open source operating system built on Linux for the enterprise server, desktop, cloud, and IoT.

Lightweight and independent distribution to provide as much performance with as less time spent.

Minimal and secure source based distribution to maximise performance.

A systemd daemon/lib to optimise Linux system performance on demand. — WARNING: this utility will not work in the distributions listed in the following website: Wikipedia: Linux distributions without systemd. — Video

Overclocking software with the aesthetics based on AMD's Radeon Software Adrenalin from 2018.

Keyboard firmware to customize key switches. Based on the tmk_keyboard firmware. — Video - WARNING: Flashing firmware is not a risk-free process and can result in a brick if anything goes wrong. Recovery ranges from time consuming to impossible and may even require buying extra tools.

Programmable Ethernet switch that allows all networked devices, VMs, containers, and applications to communicate as if they all reside in the same physical data center or cloud region, similar to LogMeIn Hamachi.

DBus daemon to configure input devices for gaming mice. — WARNING: this utility will not work in the distributions listed in the following website: Wikipedia: Linux distributions without systemd.

SteamTinkerLaunch (short STL) is a Linux wrapper tool for use with the Steam client which allows you to easily customize start tools and options for games quickly.

A Graphical UI to manage Linux overlays, such as MangoHud and vkBasalt. — Video

Website maintained by WINE HQ to track reports and ratings of video games.

A list of open source game alternatives to their proprietary counterparts.

A list of games that work natively in Linux.

A list of information about running games and related system configuration tips.

A wiki of free games and related topics started by Han Dao.

A GUI tool to adjust the core clock and voltage of Intel iGPUs.

An overview of the graphical Linux drivers.

An overview of the shaders used in games in Linux.

Note: this is only for the AMDGPU drivers. We might add AMDGPU-PRO or AMDVLK specific categories later.

Guide to overclock an AMD GPU using the AMDGPU drivers.

Fork of vibrantLinux; utility that automates NVIDIA's Digitial Vibrance Control and AMD's Saturation for games. — Only for AMD GPUs.

Nice monitoring tool for your GPU utilization (works with both FOSS driver and Catalyst one).

Note: Xorg has had a lot of problems with the xf86-video-amdgpu drivers, one of them being screen tearing. It is advisable to create a custom xorg.conf file in order to remove some issues.

If you want to explore into the Xorg configuration options, you can look into:

Note: It is not advised to install the driver through the package provided from the NVIDIA website. It is better to install it through the distribution's package manager.

GWE is a GTK system utility designed to provide information, control the fans and overclock your NVIDIA video card and graphics processor. — Only for Nvidia GPUs.

Inspired by vibranceGUI to port in Linux; utility that automates NVIDIA's Digitial Vibrance Control and AMD's Saturation for games. — Only for Nvidia GPUs.

Client with install scripts provided by the community to utilise applications and games without the hassle of manually setting them up.

Unified library for all your games. It supports all games from GOG, Steam, HumbleBundle and Humble Trove.

Hosting service for free and commercial video games (in browser and a downloadable client) with social functions.

Online-based game software program which allows players to keep their games up to date with the latest fixes and enhancements.

CLI client to launch games from the Epic Games Store.

A general-purpose Linux kernel aimed for performance and to provide more features.

A Linux kernel designed to give the optimal performance for desktop, multimedia, and gaming workloads. Only available in Debian/Ubuntu!

Latest upstream Linux kernel in addition of the TKG patchsets. — Only available in Fedora!

Wine and Proton build scripts from Tk-Glitch with easy customization and a plethora of regression hotfixes, patches, game optimizations, and other goodness. This is the build system used for all Lutris wine builds.

A Vulkan-based translation layer for DirectX 9 & DirectX 11 to play in pure Wayland without the need of X11 or XWayland. — Only available in Arch-based distributions!

RetroArch is a frontend for emulators, game engines and media players.

A curated list of software emulators and simulators of PCs, home computers, mainframes, consoles, robots and much more...

A curated list of awesome Vulkan libraries, debuggers and resources.

A curated list of awesome OpenGL libraries, debuggers and resources.

Focused on technical aspects of GNU/Linux, as well as gaming.

Linux tutorials, benchmarks gaming performance on Linux and does gaming benchmarks between Windows vs Linux.

Everything we plan to add in the future in this page will be in TODO.md.

Special thanks go to:

This project would never have happened and continued without you :)