After having some good time playing Librerama's nanogames, you may start to think: "Hey! I wish I could make some as well!"

Well, good news, you can! Thanks to Librerama being built using the Godot Engine, which is capable of loading external data package (".pck") files at runtime, one just needs to create a properly configured Godot project and export a ".pck" file of it for the game to play it. This guide will show you how!

Note: This tutorial is not intended to teach how to use the Godot Engine, and such, assumes you already have decent knowledge before going forward. If you don't have any experience with it, it's recommended to read Godot's documentation and learn its basics first.

Setting up the Project

First of all, you need to download the Nanogame Template, this repository contains a Godot project that has been tailored to make nanogames, including the basic files, as well as debugger to help test nanogames.

Do not change the file structure, due to how Godot loads ".pck" files and how dependency paths are store within resources, the file locations must be placed at those locations. The project's settings should also not be changed.

Open the project using a stable version of the Godot Engine, and open the scene "main.tscn" found inside the "community_nanogames/insert_uuid_code_here" path. This scene, as the name implies, is the main scene of your nanogame, and the one opened when loaded by Librerama. Everything that your nanogame should do needs to be in here.

The root of the main scene contains the the main script ("main.gd"), you will find that it has 1 signal and 2 methods:

It's important to know that with the exception of nanogame_start() all the other elements must be present in the script, or otherwise, the game will refuse to play the nanogame.

You will also find another file within the template named "nanogame.json". This file contains the nanogame's metadata, those being the following:

A nanogame isn't much of a game if one cannot actually play it, but you can't just set its controls to whatever the heck you desire. All nanogames need to follow a specific control set, which depends of what type of input you set in the nanogame's metadata.

The player's input can be get via Godot's is_action_*() set of methods, by checking for the following list of actions already present in the template:

Screen inputs (or the mouse on desktop) can be read by checking events on nodes like Area2D using the overridable method _input_event(). Remember to always check for the mouse, as touch events are automatically translated to it.

You should always stick to listening to those action events, as they insure that your nanogame obeys the current control set, and stays consistent with the others.

Another thing of importance is to only get the player inputs when it's allowed. Times where input should be ignored are the kickoff screen, and the win/lose breaks. It's very easy to avoid such times, by doing your input programming within the overridable _unhandled_input() method, as not only are events only given to it on the allowed times, but events that aren't the same type of your nanogame are ignored. If for some reason this is not possible, remember to only process events after the nanogame_start() method is called, and before emitting the ended signal.

The nanogame's icon is the first visual representation of it that the player will see, and as such, should reflect what's your game is about.

The template comes with a placeholder one, named "icon.png", that has the correct dimensions to base your own icon:

Note that Librerama also accepts a SVG file as an icon. But they still must obey the proper dimensions as naming (in this case, "icon.svg").

Librerama has options to define the volume level of multiple types of audio: "Master", "Music", and "Effects".

It's important for the audio in your nanogame to also obey those volume levels. Luckily, it's very easy to do so, as the template already comes with the audio buses already created, so it's just a matter of giving the bus property of the AudioStreamPlayer* nodes the correct bus:

You should not set bus properties directly to "Master". All audio sources should playback to either the other two.

An essential part of making not just a nanogame, but also any game at all, is testing and debugging it. The template comes with the Nanogame Debugger, that can be accessed by simply running the project. Once done so, you will be presented with the following screen: 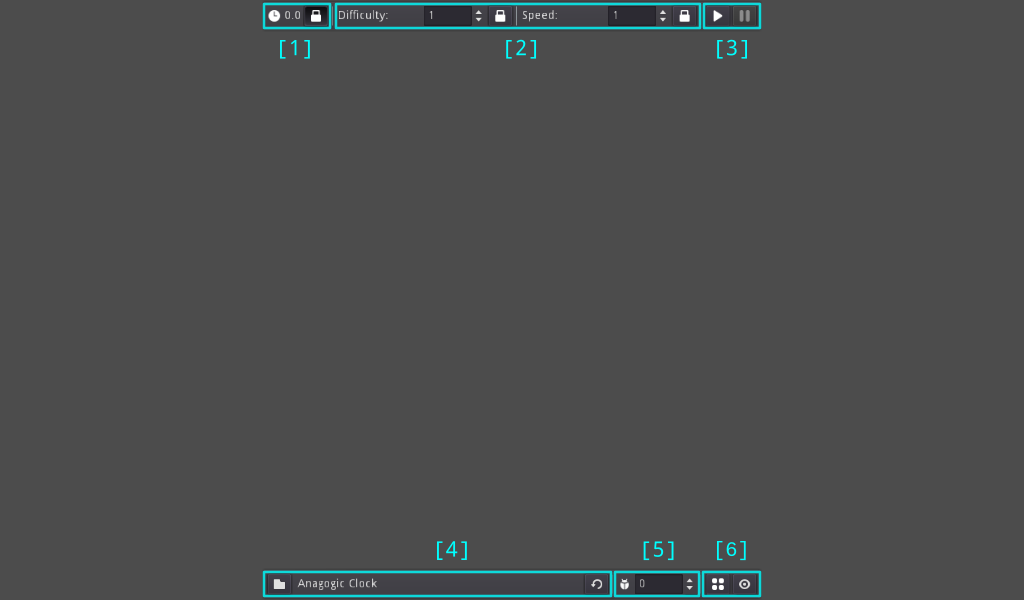 To start testing your nanogame, click in the file picker button, which will bring the file dialog, then navigate the directories until you find the "nanogame.json", select it, and if the nanogame doesn't contain errors, it will be ready for testing.

By now, you must already have noticed that your nanogame files are stored in a directory named "insert_uuid_code_here". That's because it's required for this directory to be named using an UUID code, so it doesn't clash with other community nanogames that the player may also have loaded on their device. The are numerous ways of generating them, one being via the web searcher DuckDuckGo, by searching the term "UUID".

It's very important to remind that you should rename the directory using the Godot Engine itself. Otherwise, the engine will complain about not being able to find file dependencies.

Translations are done via ".po" files. Explaining how they function is beyond the scope of this tutorial, as there are plenty of resources online on how to work with them. This is more of a hint that Librerama can make use of them for translations.

The file contents should have the translation of your nanogame's metadata, as well as any text that appears in-game. The files themselves should be stored in a directory named "translations" which should be created inside the UUID directory.

After all is said and done, when your nanogame is finally complete, it's time to export the ".pck" file! Go to the "Export" dialog, click the Android preset, and then click in "Export PCK/Zip", select the place where you want to export it and name it something that ends with the extension ".pck". Don't worry about the Android preset, the package files are cross-platform, and will be able to be loaded in device that runs Librerama.

When the exporting is finished, it's all done! It can just be placed in Librerama's "community_nanogames" directory within the player's user data directory, and the game will be able to pick it right up at the start. Now you can play it by yourself, or even better: share it with others!

The license values available to be set in the metadata is large, which is why they're being shown at the very end of this tutorial. Here they are: