Set the frame rate to 60 fps in the Output Properties. 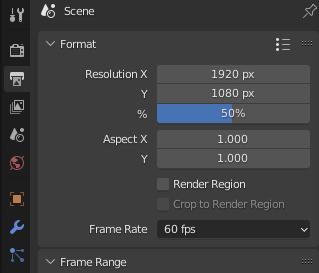 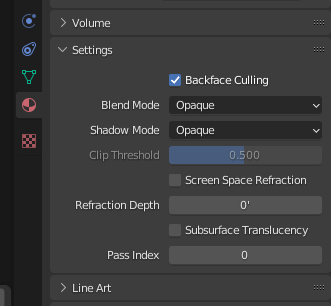 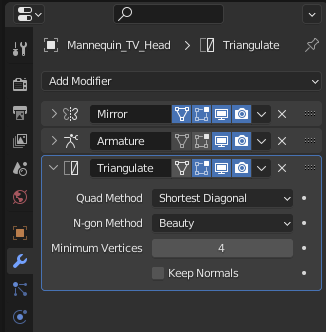 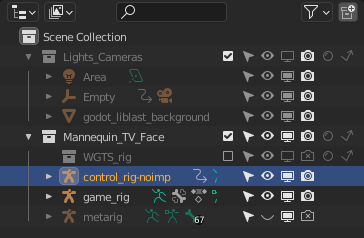 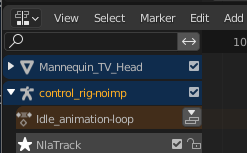 Many times, when editing a scene, there are common tasks that need to be done after exporting:

To simplify this workflow, Godot offers several suffixes that can be added to the names of the objects in your 3D modelling software. When imported, Godot will detect suffixes in object names and will perform actions automatically.

Note: All the suffixes described below are case-sensitive.

Objects that have the -noimp suffix will be removed at import-time no matter what their type is. They will not appear in the imported scene.

The option -col will work only for Mesh objects. If it is detected, a child static collision node will be added, using the same geometry as the mesh. This will create a triangle mesh collision shape, which is a slow, but accurate option for collision detection. This option is usually what you want for level geometry (but see also -colonly below).

The option -convcol will create a class_convexpolygonshape instead of a class_concavepolygonshape. Unlike triangle meshes which can be concave, a convex shape can only accurately represent a shape that doesn't have any concave angles (a pyramid is convex, but a hollow box is concave). Due to this, convex collision shapes are generally not suited for level geometry. When representing simple enough meshes, convex collision shapes can result in better performance compared to a triangle collision shape. This option is ideal for simple or dynamic objects that require mostly-accurate collision detection.

However, in both cases, the visual geometry may be too complex or not smooth enough for collisions. This can create physics glitches and slow down the engine unnecessarily.

To solve this, the -colonly modifier exists. It will remove the mesh upon importing and will create a class_staticbody collision instead. This helps the visual mesh and actual collision to be separated.

The option -convcolonly works in a similar way, but will create a class_convexpolygonshape instead. 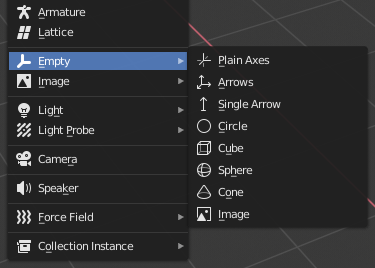 When possible, try to use a few primitive collision shapes instead of triangle mesh or convex shapes. Primitive shapes often have the best performance and reliability.

Note: For better visibility on Blender's editor, you can set the "X-Ray" option on collision empties and set some distinct color for them by changing Edit > Preferences > Themes > 3D Viewport > Empty.

A mesh node with the -navmesh suffix will be converted to a navigation mesh. The original Mesh object will be removed at import-time.

A mesh node with the -vehicle suffix will be imported as a child to a class_VehicleBody node.

A mesh node with the -wheel suffix will be imported as a child to a class_VehicleWheel node.

A mesh node with the -rigid suffix will be imported as a class_RigidBody.

Animation clips in the COLLADA document that start or end with the token loop or cycle will be imported as a Godot Animation with the loop flag set. Unlike the other suffixes described above, this does not require a hyphen.

In Blender, this requires using the NLA Editor and naming the Action with the loop or cycle prefix or suffix.

There are three ways to export glTF files from Blender. As a glTF binary (.glb file), glTF embedded (.gltf file), and with textures (gltf + .bin + textures).

glTF binary files are the smallest of the three options. They include the mesh and textures set up in Blender. When brought into Godot the textures are part of the object's material file.

glTF embedded files function the same way as binary files. They don't provide extra functionality in Godot, and shouldn't be used since they have a larger file size.

There are two reasons to use glTF with the textures separate. One is to have the scene description in a text based format and the binary data in a separate binary file. This can be useful for version control if you want to review changes in a text based format. The second is you need the texture files separate from the material file. If you don't need either of those glTF binary files are fine.

Note Blender does not export emissive textures with the glTF file. If your model uses one, it must be brought in separately.

By default, Blender has backface culling disabled on materials and will export materials to match how they render in Blender. This means that materials in Godot will have their cull mode set to Disabled. This can decrease performance since backfaces will be rendered, even when they are being culled by other faces. To resolve this, enable Backface Culling in Blender's Materials tab, then export the scene to glTF again.