JF002
/
pinedio-lora-driver
Fork 2
Code Issues Pull Requests 2 Projects Releases Wiki Activity
Driver and demo applications for the PineDio LoRa backplate for the Pinephone and USB adapter
You can not select more than 25 topics Topics must start with a letter or number, can include dashes ('-') and can be up to 35 characters long.
2 Commits
1 Branch
0 Tags
474 KiB
C++ 86.5%
CMake 13.5%
Branch: master
master
Branches Tags
${ item.name }
Create tag ${ searchTerm }
Create branch ${ searchTerm }
from 'master'
${ noResults }

PineDio is the new LoRa-based product range at Pine64. This project implements a C++ driver for the LoRa USB adapter and the Pinephone backplate.

You need to install and load this driver to be able to use the USB adapter. This spi-ch341-usb is a driver that configures the CH341 chip (USB <-> serial converter) mounted on the USB adapter and exposes it as a spidev (userland SPI API) device.

The test applications (one for the Pinephone, one for the USB adapter) provide a very basic chat application : it prints all the data received on the LoRa radio and allows sending messages to other LoRa devices.

The communicator test app are available in the directory apps/ : 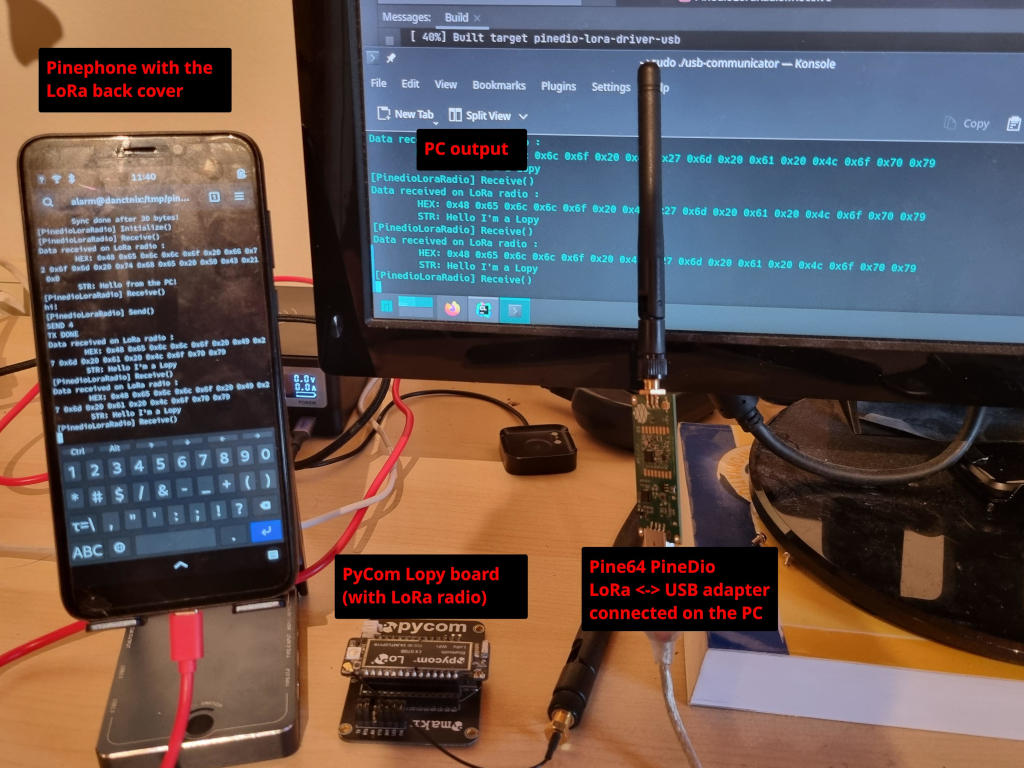 Here's a video showcasing this project.

Overview of the project structure

The goal of this implementation is to provide a common interface for both devices (Pinephone add-on and USB adapter) as they are both based on the same LoRa module (Semtech SX1262).

The implementation specific for the USB adapter is located in the class PineDio::LoRa::UsbAdapter. It uses the spidev API to access the SPI bus from the Linux userland.

Both classes derive from SX126x, the generic driver from this repo.

The generic abstraction is provided by the class PineDio::LoRa::PinedioLoraRadio, which takes a reference to a SX126x-derived object (which can be either PinephoneBackplate or UsbAdapter).

At the application level, all you have to do is instantiate the driver for the targeted device and configure it if necessary, pass it to an instance of PineDioLoraRadio and then use this instance to send and receive data:

Current state of this project

This project is at its very beginning. There are still a lot of unnecessary sleep(), and most of the configuration is hard-coded.

The test application (usb-communicator and pinephone-communicator) are also in a very early stage of development. They are already able to print all data received on the LoRa radio and to send messages from the standard input.

This project is released under the terms of the LGPLv3 license.

This project is based on this C++ SX126x driver from YukiWorkshop.

The implementation of the driver for the USB adapter is possible thanks to rogerjames99's fork of the spi-ch341-usb module from Gunar Schorcht.

The LoRa add-on board works thanks to a ATtiny MCU running this firmware from Zachary Schroeder.

This project wouldn't be possible without the good work from Pine64, which works hands in hands with the open source community to design and build nice and open devices!