Moiré will be a new DJ application written in Rust with a DAW-like timeline interface. Refer to the roadmap.

A moiré is "an interference pattern produced by overlaying similar but slightly offset templates". 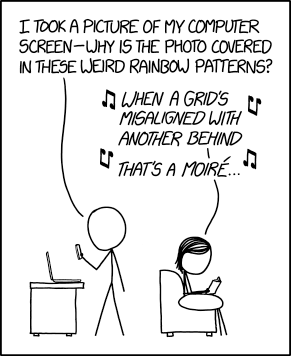 Moiré is licensed under the GNU General Public License version 3 or later.

Moiré is written in Rust and has few C dependencies.

JACK is required on all operating systems. On Windows and macOS, libjack does not need to be available at build time, only at runtime. On Linux, Pipewire JACK can be used instead of JACK1 or JACK2 (pipewire-jack-audio-connection-kit-devel package on Fedora). JACK/Pipewire needs to be running before running Moiré.

On Linux, at least one of the x11 or wayland Cargo features must be enabled. Both are enabled by default. The x11 feature requires the xcb library (libxcb-devel package on Fedora).

On Linux, fontconfig is required. Also, an XDG Desktop Portal implementation that supports the org.freedesktop.portal.FileChooser D-Bus API needs to be available at runtime. The KDE, GNOME, and GTK XDG Desktop Portal backends provide this, but the wlroots backend does not. The wlroots backend can be installed simultaneously with another backend that provides the FileChooser API.

After these dependencies are installed, building is as simple as:

and running is as simple as:

Various development tasks are automated using just recipes that are configured in .justfile.

Use Cargo for installing the just command:

Get started by installing (or updating) the dev tools required for the project:

Check that all crates can be built independently after modifying dependencies:

Each commit should pass the pre-commit hook checks: